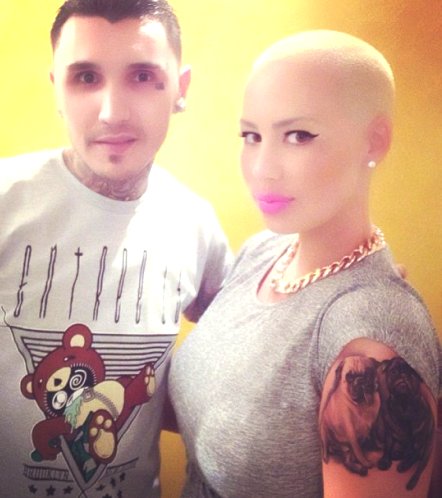 Amber Rose may have given birth to a little boy in February, but it wasn’t that baby she decided to get inked on her body last week. Instead, the singer, model and fiancé to Wiz Khalifa got a portrait of her other two “babies” tattooed on her arm – her dogs Pauly and Franky. The tribute to her dogs – both of which are kind of weird-looking pugs – is inked in black and white and is located on the upper part of her left arm. Looking at the dog on the left, you may assume that the tongue-hanging-out-of-the-mouth thing was just a funny addition made by Amber Rose herself, but judging by the many pics the singer has posted of her “babies” online, the white dog actually looks like that in real life. Who wouldn’t want that permanently inked on their body??

Singer Gets Two Pugs Inked on Her Arm

Amber Rose initially revealed her impressive dog tattoo on Instagram on April 6, along with a shout out to the tattoo artist responsible for the ink: “My guy @bobby_serna is the shit! He did a portrait of my babies Pauly and Franky today Thank you Bobby!” In the photo of her arm tattoo, the 29-year-old is posing with Bobby Serna and showing off the new artwork, which is really quite large. If you think Amber Rose’s tattoo of her two dogs is big though, you should check out the other tattoos she has scattered across her body, including a gigantic rose and shamrock tattoo that covers her upper right arm and the paw marks tattoo she she inked on her upper right thigh.

Sneaking a peek at Amber Rose’s new tattoo may have you wondering if she has gone off the deep end, but its not uncommon for dogs – alive or deceased – to find themselves immortalized in ink. In fact, there are plenty of other celebrities who have tribute tats to their dogs inked on their bodies, including the infamous pop star Pink. To date, the 33-year-old has two dog-related tats inked on her arms – the name “Sir Corky Moore” and the date her childhood pet passed away on her left arm, and a gigantic bulldog and Bible verse inked on the inside of her right arm in honor of her deceased dog, Elvis. Apparently, when it comes to their beloved pets, sentimental celebrities like Pink and Amber Rose (who both also have very colorful names) will go all out to commemorate those furry family members.