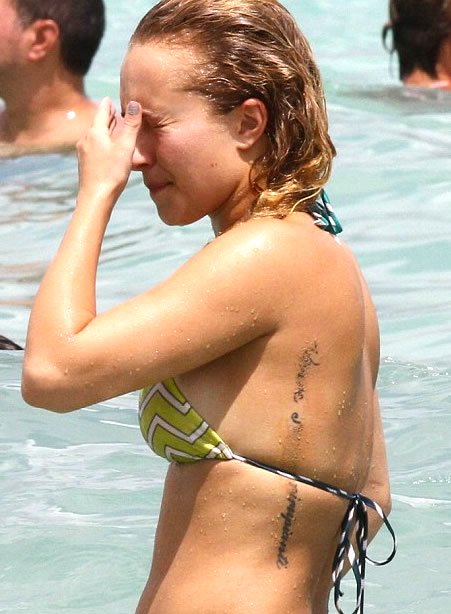 In a perfectly ironic twist of fate, Hayden Panettiere is in the process of removing a tattoo from her ribcage that says “Live without regrets.” Apparently, the Nashville actress is living with at least one regret – the tattoo itself – but not for long, judging by pics taken over Labor Day weekend of Hayden enjoying some beach time during a trip to Hollywood Beach in Florida. The 24-year-old was stunning as ever in a cute green and white chevron bikini, but the disappearing ink on her side is what caught our attention. Once a bold black tattoo stretching from below her left armpit to about halfway down her side, Hayden Panettiere’s tattoo is now a smudgy gray mess that is clearly in the process of being removed. It’s about time!

Hayden’s prominent ribcage tattoo was inked back in 2009, and the tat reads Vivere senza rimipianti, which was supposed to translate to “live without regrets” in Italian. The young actress has said that, as a child, her father always told her that whenever one door closes, another one always opens. “When I was younger, I was upset, and my dad said he wanted to show me something. He slammed one door of the bathroom, and the closet door popped open – it was a trick with the air.” Unfortunately for Hayden, her tattoo “artist” misspelled the final word of the Italian tattoo, which should have read rimpianti, and she has been stuck with the incorrect ink ever since.

Her father’s lesson was most likely the inspiration behind Hayden’s large ribcage tattoo, but the misspelling of the Italian word rimpianti has made the ink that much more meaningful for the 24-year-old. “It’s not that you don’t regret things in life, but you at least try to learn from them,” she explained during a Glamour interview back in May.

“[The tattoo is] misspelled too, so I literally have to live by that advice.” Not for long though! Although she has lived with the misspelled tattoo for four years, and has even joked about its irony on several occasions, it seems that Hayden is finally ready to let it go, and is already in the process of having the ink removed.

There’s no word yet what made Hayden finally decide on the tattoo removal route, but the actress and boyfriend Wladimir Klitschko did spark engagement rumors last spring when the couple posted a cute Instagram photo in which Hayden is wearing a huge diamond ring. Maybe she wants to get the side tattoo removed before the ceremony so she can really live without regrets!