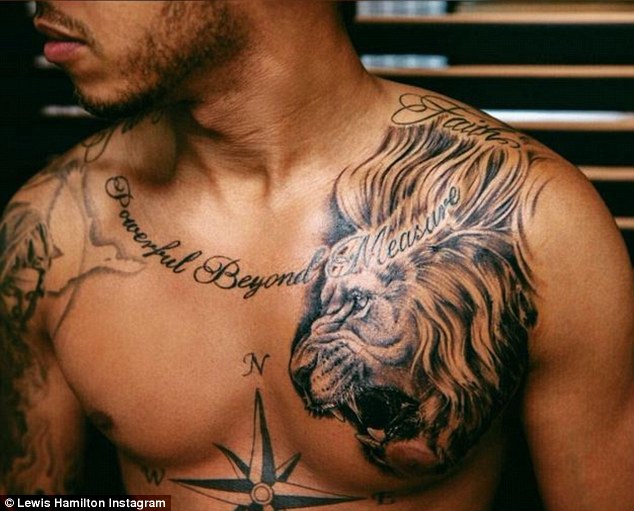 British Formula One racing champ Lewis Hamilton got a brand-new tattoo last week, and the 30-year-old debuted the fierce chest ink for his Instagram followers on the evening of July 22. Lewis Hamilton’s tattoo features the head of a lion in mid-roar, done in black and gray, and the ferocious new ink covers the left side of his chest, running into his previous “Faith” and “Powerful Beyond Measure” tats on his left shoulder and across his chest. Lewis’ lion tattoo on his chest was inked last Thursday, July 16, and, according to his explanation of the image, holds a spiritual meaning for the racing driver.

In his Instagram post this week, Lewis captioned the snap of his new lion chest tattoo: “The African Lion Symbolizes mastering your emotions…The African lion roars ferociously and the roar can be heard for miles…It is summoning the power of the sun to be unleashed at his will, he proclaims his power as a message and warning.” Bang Bang himself also shared a photo of Lewis Hamilton’s tattoo on Instagram, writing: “Little something I made for @lewishamilton such an honor to have such talented inspiring clients (this tattoo is in progress – much more to come).”

As we all know, Bang Bang is the real deal when it comes to ink, and in case you’re wondering where Lewis got the cash to score him a spot in Bang Bang’s seat, the driver just signed a new three-year deal with Mercedes for a whopping $140 million, so there’s that. As it is, this may be Lewis Hamilton’s most recent tattoo, but the Formula One racer has been collecting ink for some time now. In addition to his chest and shoulder tattoos, he also sports a Northern star tattoo on his abdomen and some religious imagery in a sleeve on his right arm. We can’t wait to find out what else Bang Bang has in store for Lewis Hamilton’s lion tattoo!