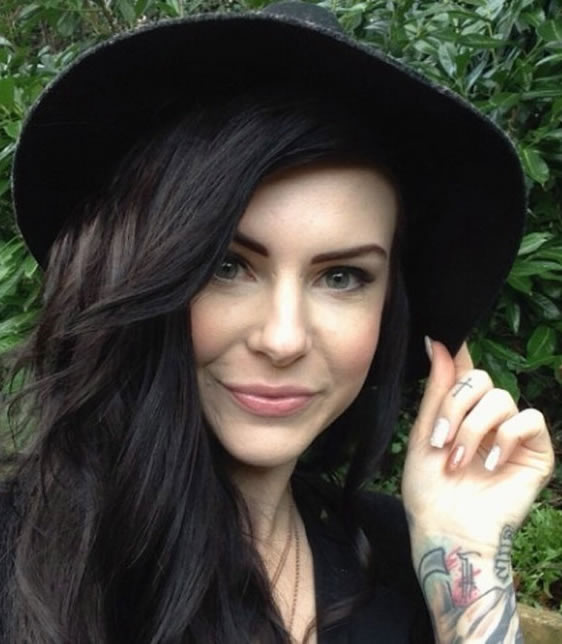 When you think about Rihanna and Justin Bieber’s most intricate and detailed tattoos, you think “Bang Bang,” because the infamous tattoo artist to the stars, Keith “Bang Bang” McCurdy, has been credited with creating some of the highest-quality tattoos for our favorite pop stars. Truth be told though, there is another, lesser-known tattoo artist out there who deserves some of the credit for these awesome tats: 24-year-old British art graduate Cally Jo Pothecary.

Cally Jo has a degree in painting from the Winchester School of Art in England, but she decided to swap her paint brushes for tattoo needles after finishing school, and gained an instant celebrity following on Facebook and Instagram when she started posting her tattoo designs online. Cally Jo’s tattoo talent caught the attention of celebrities like actress Sienna Miller and singer Huey Morgan, but it was when Rihanna flew Cally Jo out to the Dominican Republic to fix her tribal hand tattoo last year that the tattoo artist’s career really took off.

“That was pretty surreal,” Cally Jo said about meeting Rihanna for the first time in October 2013. “Rihanna’s hand is probably one of the most famous in the world so it was nerve wracking to know so many people would see my work around the globe.” It’s true that RiRi’s favorite tattoo artist, Bang Bang, accompanied Cally Jo to the Dominican to work on Rihanna’s tattoo, but it seems that Cally Jo was actually the mastermind behind the sexy, feminine ink.

“She wanted a henna look, almost like a piece of decorative hand jewelry,” Cally Jo said about Rihanna’s hand tattoo. “We were drawing on her for about ten hours but the tattoo itself only took one. Thankfully she absolutely loved it.” Rihanna isn’t the only one who admires Cally Jo’s tattoo work though. The artist has also done at least one of Justin Bieber’s tattoos, and may have also been involved in inking tattoos on Katy Perry, Cara Delevingne and Rita Ora as well.

Cally Jo grew up in a single-parent family and worked at Subway to pay her way through college, but she’s always known that her future would involve art, drawing and painting. It wasn’t until she became a teen that she developed an interest in tattoos, but that interest has since blossomed into a booming career. She explains: “My dad had some really old-school tattoos and I used to love looking at them and hearing the stories behind them. It was then I realized I could potentially combine my love of art with body art.”

As far as her reputation goes, Cally Jo just wants to spread the word that she is British. “I read lots of news reports about us being flown to the Dominican Republic but all assumed I was American,” the tattoo artist said. “I wanted to highlight the fact I’m British because we have an incredible tattoo scene here in the UK with some of the most talented artists.” It looks like Cally Jo Pothecary has left England behind for now though, in favor of working at Bang Bang’s New York City tattoo shop, so keep an eye out for more Cally Jo tattoo designs on your favorite pop stars!