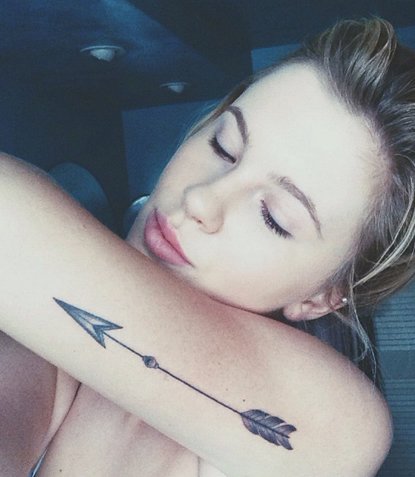 It’s becoming more and more acceptable for fashion models to sport tattoos these days (right, Cara Delevingne?), and Alec Baldwin’s teenage daughter, Ireland, is certainly taking advantage. Just over a year after debuting her first-ever tattoo – the word “Truth” on the back of her neck – the 18-year-old aspiring model has revealed two new tattoos in November and December 2013: a cool arrow inked on the back of her arm and a Buddhist-style lotus flower tat on the inside of the same arm. Ireland got her “Truth” tattoo when she was just 16, and we’re wondering if uncle Stephen Baldwin accompanied the minor to the tattoo shop, since he has quite a few tattoos of his own, including an unfortunate tribute to Hannah Montana…

Ireland Baldwin turned the big 1-8 this past October, and the model wasted no time celebrating her official entrance into adulthood. The day after her birthday, she shared an Instagram photo of herself at a tattoo parlor and then tweeted a picture of her new ink – a pretty large arrow tattoo inked in black and white on the back of her left tricep – along with the cryptic caption, “ambition, drive and perspective.” Ireland’s reason for getting the ink was a bit of a mystery at first, but some have attributed the arrow tattoo to the model’s obsession with The Hunger Games, and, more specifically, the bow-and-arrow-wielding Katniss Everdeen.

Although it would be awesome if Ireland Baldwin’s tattoo was inspired by Katniss alone, the same day that she revealed the ink, Ireland retweeted a quote that hinted at a deeper meaning behind her arrow tat. “An arrow can only be shot by pulling it backward. When life is dragging you back with difficulties, it means it’s going to launch you into something great. So just focus, and keep aiming.” We’re not quite sure what “difficulties” the daughter of Alec Baldwin and Kim Basinger could be facing these days, but she is a teenager, and that is a trial in itself, right?

Interestingly enough, like the arrow, Ireland’s most recent tattoo – the lotus flower tat she debuted on November 25, 2013 – is also a symbol of rising above challenges.

The model took to Twitter and Instagram last month to show off the pretty Art Deco-style lotus flower, which is inked on the inside of Ireland’s left forearm, and features a perfectly symmetrical black and white lotus flower with three small black dots above and one tear drop below. Although some see the lotus flower as a symbol of forgiveness and interconnectedness, the lotus, which starts out as a small flower in the mucky bottom of a pond and grows up towards the light until it reaches the surface and blooms, traditionally represents overcoming obstacles in life. What do you think of Ireland Baldwin’s new tattoos?