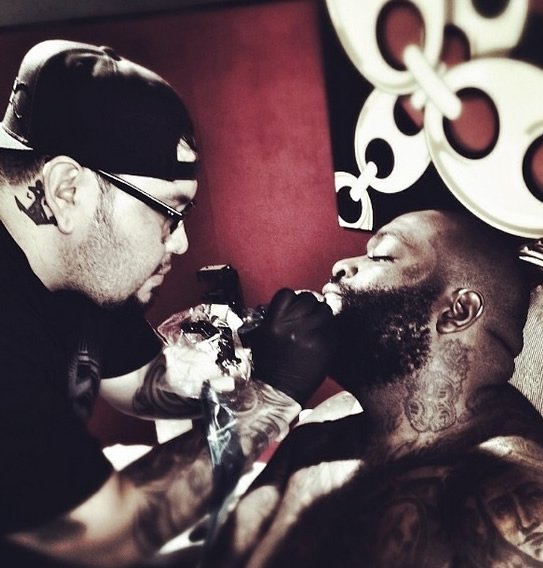 No we’re not kidding. Face tattoos are all the rage for rappers these days, and over the weekend, Rick Ross followed in the illustrious footsteps of other inked-up rappers like Lil Wayne and Gucci Mane, by getting a large and very classy “Rich Forever” tat on his chin.

Rick Ross’ tattoo reads “Rich Forever” in a black curlicue script and is inked in the middle of his chin, just below his lower lip – the perfect complement to the rest of the rapper’s facial tattoos. The tat was done by celebrity tattoo artist Nikko Hurtado, who is also responsible for several of Drake’s tattoos and some of Cheryl Cole’s tats as well, and Nikko celebrated the moment on Twitter, posting a message on May 25th that said, “Just tattooed @rickyrozay the man himself! ‘Rich Forever’ under his lip. Single needle action #MMG thanks for the hospitality bro. Honored to tattoo your face.”

“Rich Forever” is the name of Rick Ross’ third mixtape, which was released in January 2012, and has also functioned as a sort of mantra for the rapper since the project was released. The phrase, which is also the name of the mixtape’s title track, includes the lyrics:

On the way we shed some tears
Every day we sacrifice
So we can be standing here
Oh what a hell of a life
Been winning so many years
And the future is bright
Now it’s very clear
That we gon’ be rich forever, and ever, and ever

Of course, Rick Ross’ “Rich Forever” ink isn’t his first facial tattoo, nor is it the most ridiculous. He also sports a small tattoo of the state of Florida between his eyebrows, the letter “W” over his left eyebrow, the logo for Cazal sunglasses under his left eye, and the initials of his record label “MMG” also under his left eye. These facial tats are in addition to the 100+ other tattoos Rick Ross reportedly has covering his body, but the latest “Rich Forever” ink may actually be the most noticeable to date, being that it sits directly in the middle of his chin.

As far as we’re concerned, the only redeeming quality of Rick Ross’ chin tattoo is that he can cover it up whenever he wants with that solid black beard of his. What do you all think?