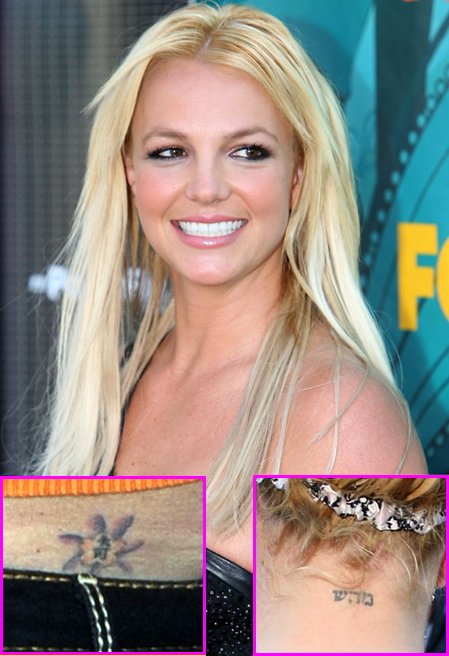 Celebrity tattoos are like a new boyfriend – at first, you’re completely in love with them…until you realize just how wrong they are. Then, it’s just a matter of time before they are removed from the equation. As long as the world keeps turning, celebrities like Rihanna and Miley Cyrus will continue to get inked. But with their high-profile lives and seemingly endless cash flow, you’d think that they would take extra caution to ensure that the images they are permanently emblazoning on their bodies are void of errors. Lucky for us, pop singers and Hollywood stars are just as vulnerable to tattoo mistakes as you and me. So check out this list of the top seven worst celebrity tattoo screw-ups and maybe feel just a little bit better about your own mistakes.

Poor Liam Hemsworth. The hunky Australian actor is all gung-ho about his budding relationship with Miley Cyrus and decides to get a matching tattoo inked on his arm, only to have it misspelled. The unfortunate tattoo mistake took place in October 2012, when Liam had an excerpt from Teddy Roosevelt’s infamous “Citizenship in a Republic” speech inked on the inside of his left arm to match Miley Cyrus’ tattoo. Instead of saying, “if he fails at least he fails while daring greatly,” which is super inspirational and all, Liam’s tattoo is missing the second “he.” Turns out tattoo mistakes in English happen too!

And then you have Ashley Greene, who is best known for her role in the Twilight franchise and the obvious tattoo mistake on her foot. On the top of her left foot, Ashley has the phrase “lifes a dance” inked in black, which is sweet and all, but it would be even sweeter if the foot tattoo wasn’t missing its apostrophe. Lucky for Ashley, this glaring tattoo mistake is easily fixed; we’re just wondering why she hasn’t done it yet…

When Hayden Panettiere first went under the needle in 2009, there was no way she could have known she was getting a hilariously ironic tattoo inked on her side. The actress had the Italian phrase “Vivere senza rimipianti” inked on her left side/back thinking that it would mean “live without regrets.” Unfortunately, the last word in Hayden Panettiere’s tattoo is misspelled, and should have read “rimpianti,” without the extra “i” in there. The actress is currently in the process of having her Italian tattoo removed via laser treatment. You know what’s really easy people? Recognizing a spelling mistake in English…just sayin’.

Oh David Beckham. He meant well, but it must be the ultimate tattoo sin to have your wife’s name misspelled in permanent ink on your arm.

The model and soccer star got a tribute tattoo to wife Victoria in 2000, and the gigantic arm tat was supposed to say her name in Sanskrit. Unfortunately for the both of them, David Beckham’s tattoo actually reads “Vihctoria.” Now all he has to do is look down at his arm to remind himself of all the mistakes he’s made in his life.

Lucky for Christina Aguilera, her ridiculous tattoo mistake actually worked out in her favor. When she went under the needle, the singer meant to get then-husband Jordan Bratman’s initials inked in Hebrew on her arm. Instead of “JB” though, she ended up with a random set of characters that combined to form the number “12.” Now that Christina and Jordan are divorced, the pop star is probably thanking her lucky stars that she doesn’t have her ex’s initials inked on her body, like so many other celebrities out there!

Like Rihanna, Britney Spears has two tattoo mistakes on her body – both of which are inked in a foreign language. First up is the Chinese symbol tattoo she had inked on her hip that was supposed to translate to “mysterious.”

Instead – and this is pretty embarrassing for poor Brit – the hip tat actually says “strange.”

The singer obviously didn’t learn from her mistake though, because not long after, Britney got another foreign language tattoo inked on the back of her neck – this time reading “God” in Hebrew. Only it didn’t say “God” because it was misspelled. We’re thinking from now on, Ms. Spears should just stick to what she knows – English.

Mirror, mirror on the wall, who’s the most tattooed of them all? That would be Rihanna, who has racked up an impressive 22 tattoos so far in her 25 years of life. But with all that ink, there was bound to be a mistake in there somewhere. Unfortunately for RiRi, there are actually two… 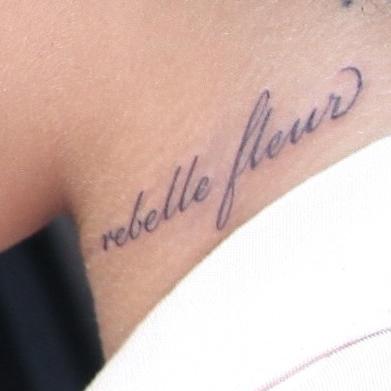 On her neck, the pop star has a French tattoo that reads “rebelle fleur” – a testament to Rihanna’s duality that has a glaring grammatical error. In French, unlike English, the adjective actually comes before the noun, which means the phrase “rebellious flower” would have read “fleur rebelle.” Oops! True to form though, Rihanna has said that she intended for the neck tat to say “rebel flower.” So there.

RiRi also has a misspelled Sanskrit tattoo on her hip that quotes a holy Hindu scripture, the Sanatana Dharma. Rihanna’s tattoo, inked in 2007, was meant to say “forgiveness, honesty, suppression and control.”

Instead, it translates to “long suffering, truthfulness, self-restraint, inward calm, fear and fearlessness.”