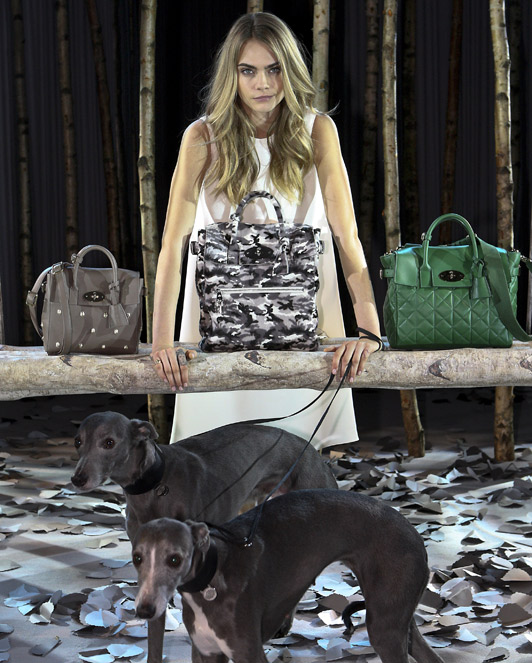 When Cara Delevingne agreed to put her name on a new line of designer Mulberry bags, she didn’t want to just slap her name “on any old thing,” so instead she designed an inspired collection of purses and backpacks with specific features based on – what else – her tattoos! After experiencing a slump in handbag sales recently, Mulberry commissioned up-and-coming model Cara Delevingne to recapture the success of the designer brand’s “The Alexa” line, which debuted in 2009 and was inspired by British fashion model Alexa Chung. Mulberry revealed the Cara Delevingne Collection during London Fashion Week by posting pictures on social media of Cara standing with three bags, all of which feature personal touches inspired by Cara Delevingne’s tattoos.

The partnership between Cara and Mulberry began when the model shot her latest Mulberry campaign back in the fall, when, as Cara says, they “discovered a mutual love for the countryside, for animals – and for functional bags.” Among the bags in the Cara Delevingne Collection is a three-in-one job with detachable straps that can be worn as a backpack, over the shoulder, or as a regular handbag. Sounds pretty normal to us, but Cara insists that this isn’t your everyday celebrity/designer collaboration. “I hate that thing where celebrities just slap their names on any old thing,” Cara said during a recent interview. So what did Cara do? She made the Mulberry bags her own, adding lion rivets inspired by her awesome finger tattoo on one limited-edition version, and a heart patch and “Made in England” stamp inspired by two other tats on all of the bags.

Cara, who began 2013 with zero tattoos, now sports a collection of ink rivaling some of the most tattooed female celebrities, and the British model is clearly proud of her unique tattoos, especially her first. Back in May 2013, Cara accompanied her tattoo-obsessed gal pal, Rihanna, to a session with celebrity tattoo artist Keith “Bang Bang” McCurdy, and ended up with a pretty fierce and detailed tattoo of a black and white lion’s face on her index finger. Although finger tattoos have been a growing trend since Rihanna first debuted her “Shh…” and “Love” tats back in 2008, the incredible detail in Cara Delevingne’s tattoo spawned a new era of finger tattoos that incorporate intricate designs in the tiniest spaces. And now Cara’s lion tat and other tattoos have inspired a whole line of Mulberry bags! This girl is definitely on a roll.