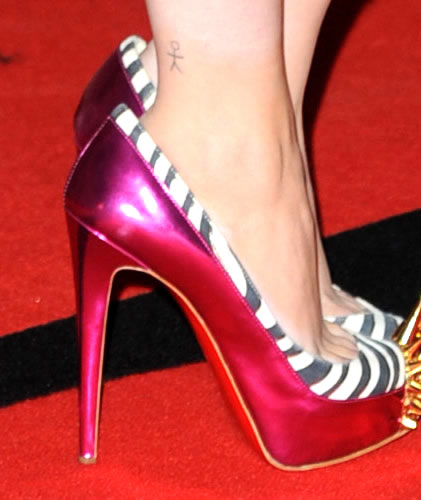 Cher Lloyd debuted her first ankle tattoo at the Brit Awards in February 2012, and the simple stick figure image left fans of the British singer scratching their heads. On the back of her right leg, near her ankle, Cher has a tiny tattoo that features a crude stick figure man with a circle for his head and simple straight lines for his body and limbs. In an even stranger turn of events, One Direction’s Louis Tomlinson revealed a tattoo in October 2012 that is almost identical to Cher Lloyd’s tattoo on her ankle. The only difference is, Louis Tomlinson’s tattoo is inked on the inside of his right forearm and features a rudimentary stick figure man riding a skateboard. So what’s the deal with Cher and Louis’ matching tattoos? Turns out, Cher’s tat does match someone else’s, but it’s not Louis’ tattoo…it’s Craig Monk’s! “It’s definitely love,” Cher said about her relationship with her future hubby, who has quite a few tattoos of his own. “We got matching tattoos – I’ve got a stick man and he’s got a lady one.” Well there you have it folks – the stick figures say it all!