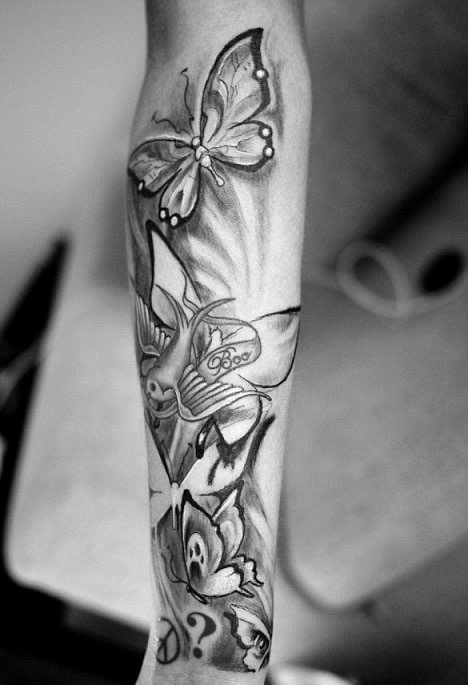 Similar to Demi Lovato’s flock of birds tattoo on her arm, pop star Cher Lloyd has a large tattoo on the inside if her right arm that features five or more butterflies joined together by a gray background design to form a partial sleeve. The butterflies in Cher’s arm tattoo are all inked in black and white, but are designed in varying shapes and sizes to create a very interesting and attractive piece of artwork. The uppermost butterfly in Cher Lloyd’s tattoo, which was reportedly inked in Miami where the singer was working on her debut album, rests just below the crook of her elbow, and the large arm tattoo extends all the way down to the singer’s right wrist, meeting up with her question mark and peace sign tattoos. Incorporated into the butterflies tattoo, which Cher added to her collection in May 2011, is the flying bird and “Boo” banner that the singer got inked in her late uncle’s memory a couple of months prior.

Cher Lloyd debuted her butterflies arm tattoo on Twitter on May 7, 2011, at the age of 17, uploading a black and white photo of the tat and including the caption: “my new ink :)” Before getting her butterflies tattoo, Cher had been accumulating tats here and there, but none of them spelled “full sleeve” quite like the butterflies on her right arm. During an interview following her first American concert in March 2012, when asked whether she was planning to get full sleeves, Cher said, “Definitely. Not on this part [the backs of her arms] though, because that’s like not feminine. On the insides, not the outsides.” Cher has also said about her self-professed tattoo addiction, “I just want to be covered. I know people say ‘what about when you’re old and you’re covered in tattoos?’ – so what. Then it’s going to be like a piece of artwork that people can look at and see all the crazy things I did in my life.”