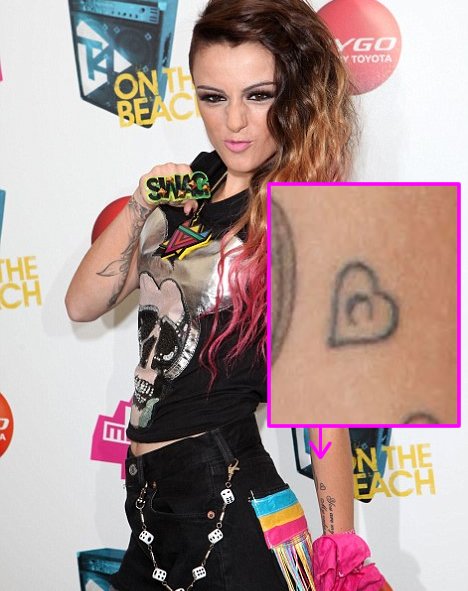 At the same time that Cher Lloyd got her “You Are My Sunshine” tattoo on her left arm in 2011, the singer also got a small heart tat inked in black and white with the letter “C” inside the heart. Cher’s “C” and heart tattoo is inked on the inside of her left arm, next to her empty birdcage tattoo, and is believed to be a tribute to the singer’s then-boyfriend Craig Monk, the pop star’s hairstylist. Plenty of female pop stars have opted for tattoo tributes to their leading men (think Rihanna’s tattoos of the stars on her neck and the tribal dragon claw on her hand), and Cher Lloyd is no exception. In addition to the letter “C” and heart tattoo she has inked on her arm, Cher Lloyd’s tattoos in honor of her beau include the name “Craig” inked on the inside of her right wrist, a small red and black heart on her ring finger, and the lyrics to “You Are My Sunshine” inked on the inside of her left arm – right next to the letter “C” and heart tattoo. One thing’s for sure – Cher better never call it off with Craig!