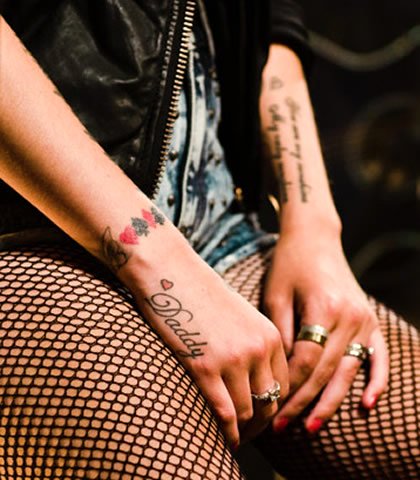 Cher Lloyd is obviously a fan of heart and diamond tattoos, and the British pop star found a clever way to feature both designs in a single tat on the outside of her wrist. One of the many tattoos located on Cher’s right hand includes the four suits found in a deck of playing cards: hearts, spades, diamonds and clubs. Cher Lloyd’s tattoo is inked in the appropriate red and black colors traditionally associated with each suit and the ink is situated on the outside of her right wrist, where it meets up with the edges of the butterflies tattoo the singer sports on the inside of her right forearm. When she got her suits tattoo, Cher broke her own rule about not getting ink on the outsides of her arm – which she says isn’t feminine – so the tat must mean something important to her!

Cher hasn’t said much about her playing card suits tattoo in public, but we’re guessing there is some underlying meaning behind the unique tat, since the singer says all of her tattoos mean something to her. “I don’t just get them for the sake of it,” she has said about her extensive tattoo collection. The most common interpretation of a playing cards tattoo though, is that the wearer is a fan of cards or gambling, but we somehow don’t believe that this is what Cher meant to symbolize with her wrist tat. Cher has several other heart and diamond tattoos located elsewhere on her body, and the images obviously hold a deeper meaning for her. Well, the secret’s out! Like many of Cher’s other tattoos, the suits tat matches the same tattoo future husband Craig Monk has on the outside of his right wrist, near the “Cher” tat he sports on his right forearm. The matching wrist tattoos must have something to do with their love for one another, or maybe just a shared love of card games.