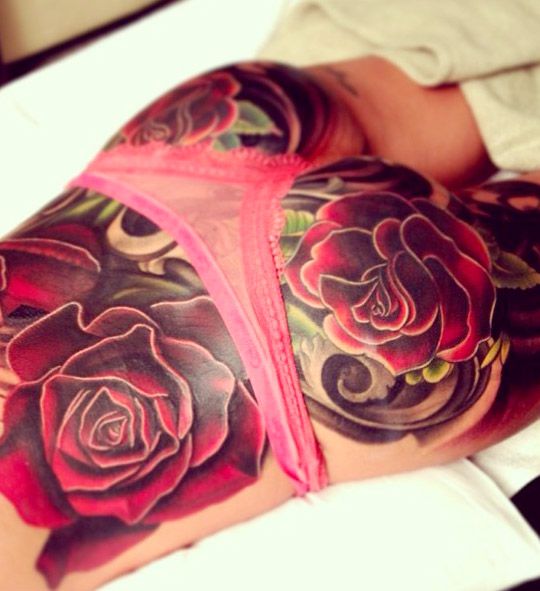 Cheryl’s Back Tattoo – How Low Can it Go??

Back in March 2013, we broke the news about Cheryl Cole’s back tattoo – a collection of large red roses that takes up the majority of the pop star’s lower back. Now it appears that the singer has finally completed the tattoo of English roses (her favorite flowers) by continuing the design so that it covers her butt and upper thighs as well. “I’ve had it for seven-eight months but only just had it detailed,” Cheryl tweeted after debuting the shocking roses tattoo. “I can pretty much safely say I’m now done!” Cheryl received mixed reviews about the gigantic tattoo, to which she responded: “People are entitled to their own opinion. Personally I’ve never really concerned myself with other people’s body parts!”

Cheryl Cole is “Tough as Nails” 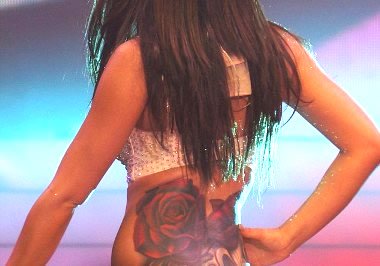 Back when Cheryl first unveiled the roses tattoo on her back, she said, “It was really painful but I think I’m done with tattoos now. It wasn’t for any particular reason, I just like the design. It took 15 hours in total.” We were confused about the 15 hour thing because, even though the back tat is colorful and detailed, 15 hours seemed like an awfully long time to complete the piece on her back. Now that we’ve seen the rest of the roses tattoo, the 15-hour tattoo session makes a whole lot more sense! When he uploaded the image of Cheryl’s butt tattoo (without naming her or showing her face), Nick Hurtado accompanied the photo with the caption: “It was some intense tattooing sessions. She’s tough as nails.” We’ll say!