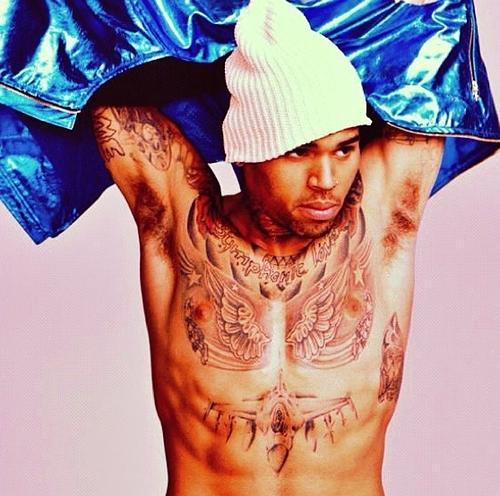 Rihanna has reportedly dropped a cool $1 million on Chris Brown’s 24th birthday present – a limited edition 2009 Mercedes Benz SLR Stirling Moss – which has us wondering what the birthday boy is going to get for himself…possibly a new tattoo? According to reports, Rihanna has a concert in New York City on Breezy’s big day, and RiRi is hoping the birthday boy will make the trip so they can celebrate his 24th together. You know who else is in NYC, besides Rihanna? One of Chris Brown’s favorite tattoo artists – Keith “Bang Bang” McCurdy. The ball definitely seems to be in Chris Brown’s court these days; he and RiRi are finally back together, he is prepping for the release of his upcoming album, and he plans to spend his birthday this Sunday with his leading lady. So what better way to celebrate the big 2-4 than to get a new tattoo?!

Matching Tats for RiRi and Breezy?

You’d think that getting Chris Brown a souped-up custom car (one of only 75 ever made, mind you) with his initials imprinted on the red leather seats would be birthday gift enough for Rihanna. But no, a source has reported that the car is only RiRi’s main gift to Breezy, and that she has “got a few things up her sleeve” for his big celebration. Tattoo parlor anyone?? There’s no doubt that Chris Brown went all out for RiRi’s 25th birthday in February, so we have a feeling she is going to want to return the favor and make his big day extra special. As you can see from one of our earlier posts about the couple’s tattoo-ridden relationship saga, Rihanna and Chris Brown love them some ink, and we wouldn’t be surprised if they ended up getting matching tattoos this weekend!

Chris Brown has been surprisingly quiet on the tattoo front since he got his “X” crossbones foot tattoo back on February 28, and we don’t know about you, but we think two months is far too long for Breezy to go without getting inked. In fact, he is probably going through withdrawal symptoms right about now. Lucky for him, his upcoming birthday is as good a reason as any to indulge in some new artwork. Chris Brown may be hosting a sold-out birthday bash at L.A.’s Emerson Theatre on Friday, May 3, but Sunday, May 5 is the main event, and we’re going to take a wild guess and say he plans to spend it with his main squeeze, Rihanna. Whether or not their own personal celebration involves some new tats remains to be seen. Stay tuned!