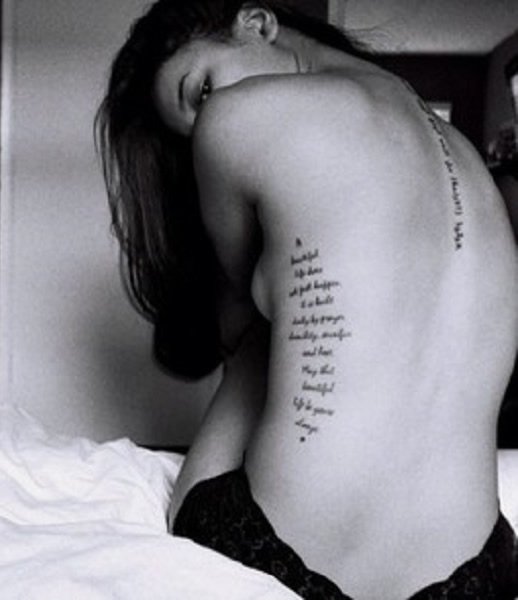 The Chris Brown and Rihanna relationship rollercoaster keeps the two pop stars in the news pretty consistently, but Karrueche Tran is apparently determined to get the attention she has been missing out on since she and Breezy called it quits last year. The model recently posted a racy photo on Instagram showing off her side and back tattoos, and the move has Chris Brown fans wondering if the seductive pic was meant to grab the attention of her famous ex. It’s not just the fact that she is wearing nothing but lacy underwear in the photo though, it’s what her side tattoo actually says. Read on and let us know what you think the real motive was behind Karrueche’s risqué tattoo shot.

Karrueche Tran and Chris Brown got matching Zodiac tattoos back when the couple was still together, but that wasn’t the model’s first tattoo. Karrueche actually has a whopping six tats, including a phrase inked on her spine that reads “An ounce of blood is worth more than a pound of friendship,” and a large inking on her ribcage that says, “A beautiful life does not just happen, it is built daily by prayer, humility, sacrifice and love. May that beautiful life be yours always.” These are the two tattoos displayed in the black and white Instagram picture of Karrueche, which shows the 24-year-old posed with her bare back to the camera and glancing back with a sultry look.

The sexy Instagram photo may have been intended as a bit of an “eat your heart out” moment aimed at Breezy, but the actual meaning of Karrueche’s side tattoo has some wondering if the model posted the pic as a means of forgiving Chris Brown for the tumultuous end to their relationship. Shortly after Breezy broke it off with Karrueche to get back with Rihanna, the controversial singer pretty much immediately had his arm tattoo of Karrueche Tran’s face removed. It was almost like Karrueche never existed, and that had to be a tough pill for her to swallow after their year-long relationship. Then again, recent reports have Chris Brown and Rihanna’s relationship back on the rocks, so Karrueche’s steamy tattoo photo may have come at just the right time. She could be back in the game, folks!