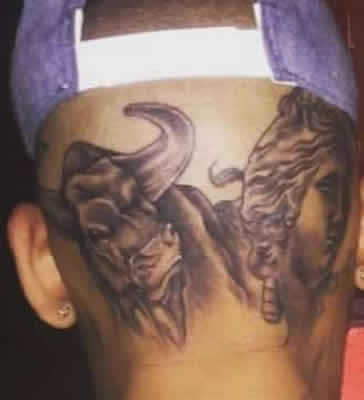 Just two days after revealing a tattoo of Venus de Milo on the back of his head, Chris Brown has extended the bizarre tattoo by adding an image of the head and body of an angry-looking bull. Breezy’s angry bull tattoo is inked on the left-hand side of the back of his head, right next to his new Greek Venus de Milo tat, and just above the crossed feathers tattoo he has inked on his upper back. This latest skull tattoo, is inked in black and white, and the bull depicted in the image has all-black, fierce-looking eyes.

Chris Brown took to Instagram to show off his new angry bull tattoo on August 27, captioning the snap (in which he’s rocking some serious bling on his fingers), “I do what the f*** I want! #rockstar #500 #onehellofanight #legendarynights @iamkingrico.” Both of Chris Brown’s tattoos on the back of his head were apparently inked by King Rico, owner of Ink Studio tattoo shop in the Bronx, New York, during a tattoo session that, according to Breezy, took place on #onehellofanight.

There’s no doubt that Chris Brown has been making some questionable decisions of late, so we’re not surprised that the singer has decided to get two huge tattoos inked on the back of his head. It’s also not surprising that Breezy opted for a tattoo of an angry bull – which is what some people would compare him to – although we were surprised when we first saw Chris Brown’s head tattoo of the Venus de Milo sculpture, which is believed to depict Aphrodite, the Greek goddess of love and beauty. So what does it all mean?

Chris has yet to explain the meaning behind his two head tattoos, but one fan offered up a possible explanation of the new ink on Instagram, writing, “Representing the Taurus, ruled by venus the Goddess of Love.” It’s true that Breezy’s birthday, May 5, falls under the sign of the Taurus, and according to astrology.com, Taurus, the second sign of the zodiac, is all about reward. “Think physical pleasures and material goods, for those born under this sign revel in delicious excess.” Hmm…now we get it!