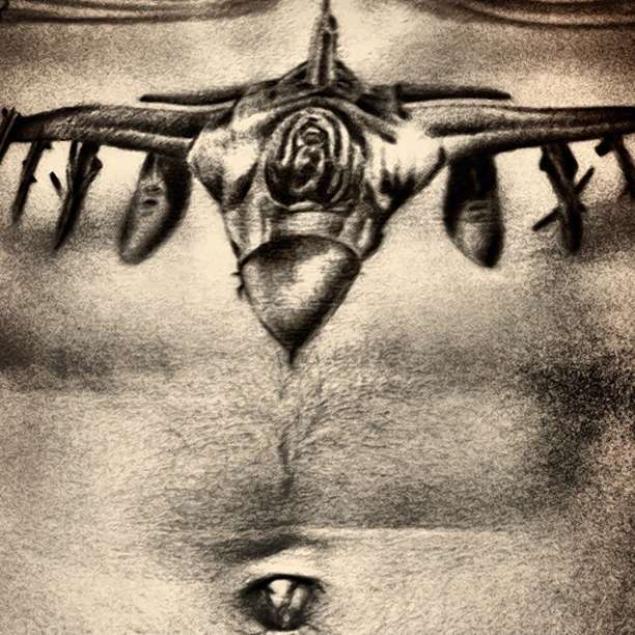 Chris Brown has debuted a brand new chest tattoo of an impressive F16 fighter jet, but all we can see is that it’s inked in the exact same spot as RiRi’s goddess Isis chest tat. On September 12, 2012, Brown posted a pic of his fighter jet tattoo on Instagram along with the simple message, “Fly @johnpetro.” What do you think of Chris Brown’s chest tat? Do you think he intentionally copied Rihanna’s new tattoo placement?

Chris Brown and Rihanna seem to be going tit for tat when it comes to getting new tattoos. A few days after Rihanna unveiled her goddess Isis chest tattoo as a tribute to her grandmother, and just two weeks after debuting his own “sugar skull” neck tattoo, Chris Brown adds a new tat to his ever-increasing collection: a large fighter jet inked across his ribcage, just below his wings chest tattoo. And not only does Chris Brown’s new chest tat come in close proximity to Rihanna’s chest tat, but it’s also inked in almost the same exact spot! Maybe Chris Brown’s fighter plane ink was meant as a diversion from the negative publicity his sugar skull-inspired neck tattoo got for its similarities to a bruised and battered Rihanna. If so, getting another new tattoo in the same spot as Rihanna’s most recent ink was probably not the best way to accomplish this goal.

Although most of Chris Brown’s tattoos have been inked by the singer’s favorite tattoo artist – Peter Koskela – Breezy’s new jet fighter tattoo was inked by an artist named John Petro. Before delving into Brown’s new ink, Petro tweeted the following message: “About to go in on this #fighterjet #f16 #plane #tattoo on #chrisbrown,” along with a picture of the jet plane stenciled across Brown’s abs. The wings of the F16 curve around to the 23-year-old’s sides, much like the wings of Rihanna’s chest tattoo. The nose of the fighter plane in Brown’s tat points downward, with the jet’s missile launchers facing outward. In the photo of Chris Brown’s newly completed tattoo on Instagram, the singer looks awfully somber for just adding an impressive ink job to his body. What’s the deal, Breezy?

Chris Brown on His Tattoo: “Fly” and “Art” 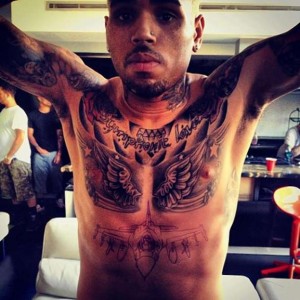 Chris Brown has far too many tattoos to count, and while many of his tats seem to have an important meaning for the singer (like his mom’s name on his wrist), just as many seem to be totally random and obscure (like the wolf Indian chief tat on his neck). While we’re all wondering what made Chris Brown get a tattoo of a fighter jet on his chest, CB has just one word to offer us: “Fly,” which is the message he wrote along with the chest tattoo pic he posted on Instagram. In defending himself about the meaning of his controversial Mexican Day of the Dead tattoo on his neck, Brown tweeted, “I’m an artist and this is art.” So perhaps that’s all Chris Brown’s chest tattoo is: Art.

Despite the fact that Rihanna and Chris Brown’s chest tattoos are very different in subject, you can’t ignore the obvious similarities in location and aesthetics. On September 9, Rihanna revealed her chest tattoo in pictures online, along with the tweet, “Goddess Isis – Complete Woman – Model for future generations – #GRANGRANDOLLY.” It’s painfully clear that Rihanna was very close to her grandmother, who passed away from cancer earlier this summer, so the meaning of Rihanna’s chest tattoo is no mystery. For his own part though, Chris Brown hasn’t said anything in public about his new jet fighter tattoo, so we are left to wonder what the tattoo meaning could be. Stay tuned, and we’ll update you about the singer’s tat and what it means for Chris Brown!