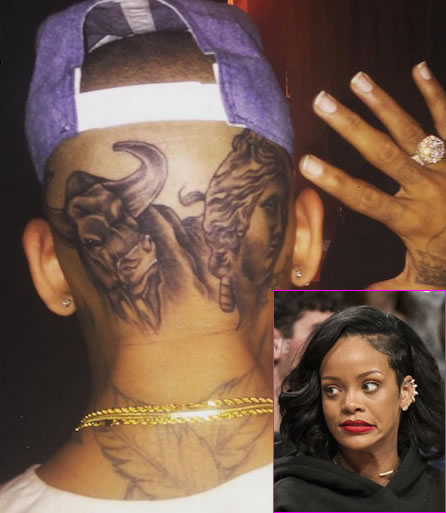 We were all a little skeptical when Chris Brown revealed two huge new tattoos inked on the back of his head late last month, but no more so than Breezy’s ex-flame, Rihanna, who reportedly called Chris Brown’s tattoo choice a “poor decision.” Numerous sources have since reported that Rihanna is “disappointed” with Breezy’s head tattoos, and thinks the singer is going overboard with his ink, which at this point, covers almost his entire body.

Rihanna herself has more than Rihanna Tattoos, the latest being her birth year “1988” inked in a black Gothic font on her ankle, but the songstress is apparently “not feeling” Chris Brown’s fresh new ink, which features an image of Chris Brown Venus de Milo Tattoo on the right side of the back of his head, and an Chris Brown Bull Head Tattoo, which represents Breezy’s Zodiac sign, the Taurus, on the left side of the back of his head. Since getting his Venus de Milo and Taurus head tattoos, Chris Brown went back under the needle this week for Chris Brown New Leg Tattoos of Dragon Ball Z, Astro Boy, BAPE and Mega Man.

“RiRi is a big tattoo fan but there comes a point when too much is too much and in his case he went overboard getting those ridiculous tattoos on his head,” says one inside source about Chris Brown’s new ink. “[Rihanna] is disappointed and told him point blank that was a poor decision and that he should slow down.” Chris obviously doesn’t think his head tattoos were a poor choice, and the singer recently took to social media to point out that the ink on the back of his head is actually a tribute to his one-year-old daughter, Royalty.

In an Instagram photo Breezy posted shortly after getting his head tattoos, the singer wrote: “Venus de Milo; the Greek Goddess of Love. Bull; represents the Taurus that I am. Strategically placed on the left side of my head in protection of my heart for the Love of my Goddess…ROYALTY is everything and as man, we protect that with everything!” So, if we understand this correctly, Breezy’s daughter Royalty is represented by his Venus de Milo tattoo and Chris Brown himself is represented by the Taurus tat, so he can protect her.

Chris Brown was quick to offer up an explanation for his head tattoos, possibly because he knew people would think they were wack, but it must have smarted at least a little bit to hear that his beloved RiRi wasn’t a fan of the new ink. “He wasn’t too happy that she called him out about it. But she got to be real with him about it. I mean even his fans think that they are ridiculous.” If Chris Brown’s fans think his Venus de Milo and Taurus bull tattoos are “ridiculous,” we’re wondering what they think of the FOUR new leg tattoos the singer revealed this week??