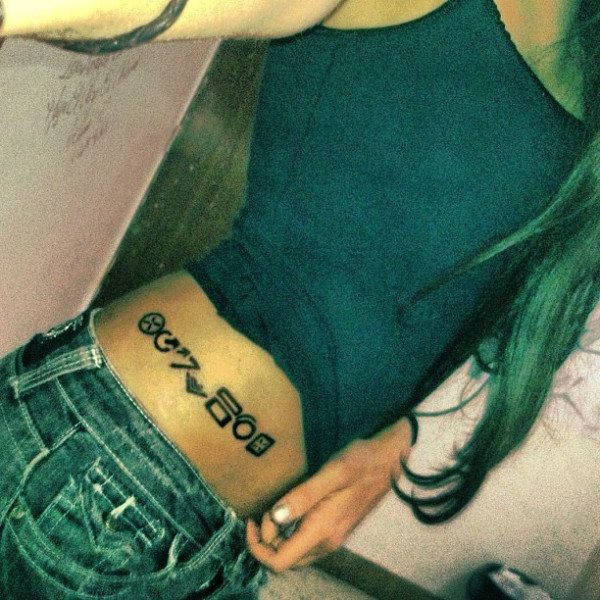 According to Chris Brown, the seemingly random symbols on the cover of his album Fortune form a code – what he calls an encryption for his fans to figure out. Well, we all know by now that the wingdings-looking font is actually hieroglyphic symbols meaning “Fortune,” but did you know that there are Breezy fans out there devoted enough to get these “ancient aliens” symbols permanently inked on their bodies? Check out these super-intense Chris Brown fans (you might call them “stans”) and the Breezy-inspired tattoos they got as tributes to the R&B singer’s most recent album!

Chris Brown released his most recent album, Fortune, earlier this year, and the unique cover left some Breezy fans scratching their heads. Instead of going the traditional route with the title on his album cover, Brown used a wingdings-type font to spell out “Fortune” in a cryptic series of symbols. Turns out, the word “Fortune” is actually written in hieroglyphics, a decision that Brown attributes to his fascination with ancient aliens. On the album cover, Breezy poses against a light blue backdrop with the word “Fortune” written in different languages in the background and the hieroglyphics spanning the width of the cover across Brown’s midsection. Despite the fact that Brown’s fifth studio album received mixed reviews from critics, these Chris Brown superfans are obviously obsessed with the R&B star’s unique album title. They had it permanently tattooed on their bodies!

A female fan of Chris Brown decided to show her devotion to Team Breezy by getting the very same Fortune logo inked on her right hip. The girl posted her Chris Brown-inspired tattoo online and gained immediate fame for her cryptic hip tattoo tribute to the R&B star, who has been getting his fair share of attention for his own ever-growing tattoo collection. Now this girl can pretend that her Fortune tat matches Chris Brown’s sleeve tattoo that says “FAME.” You can’t see the girl’s face in this picture of the hip tattoo, but she looks pretty darn young. We sure hope she doesn’t decide at some point down the line that she isn’t a Chris Brown superfan after all. Otherwise, it’s goodbye wingdings, hello, laser tattoo removal!

Guy’s Fortune Tat on Upper Back 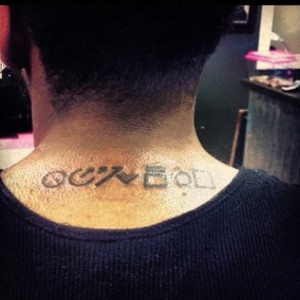 This guy clearly holds a spot on Team Breezy, and, although he didn’t go and get a huge tattoo of Chris Brown’s face on his back, he still chose to devote a portion of his body to the controversial singer. This male Breezy fan hit the tattoo parlor and got the hieroglyphics Fortune logo inked on the upper part of his back, just below his neck. The Chris Brown-inspired tattoo looks pretty fresh in this picture, and it’s hard to see the details of the tat with the glare, but it looks pretty spot-on. We wonder what the tattoo artist was thinking while he inked these symbols on the back of a fanatical male Chris Brown fan? 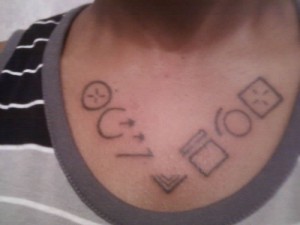 Another male Chris Brown fan got a matching Fortune tattoo, but decided to put his ink right smack dab on his chest. Although this guy’s chest tat includes the same hieroglyphic symbols as the others, this particular fan opted for a unique layout, getting the tattoo inked in a “V” shape instead of in a horizontal line. The Breezy-inspired tat is inked on the upper part of his chest, with the “T” symbol – which is fittingly shaped like a “V” – as the lower point of the tat. Every time this guy takes off his shirt (or wears a low-cut tank top like this one), he gets to remind himself and everyone around him what a gigantic fan of Chris Brown he is. Super cool, dude.

One Response to: Chris Brown Superfans Get Cryptic Tattoos of Fortune Album Logo