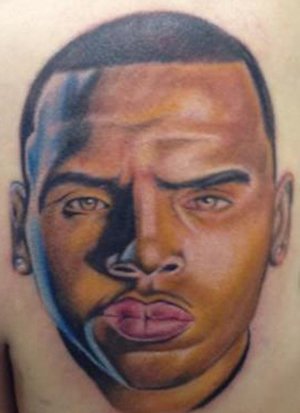 A man from the U.K. got a tribute tattoo to Chris Brown, but it’s not the everyday “Chris Brown” or “I heart Breezy” tat you might seen on a fifteen-year-old female fan. No, Jamie Frater, a die-hard Breezy fan that calls the singer his “idol,” went the whole nine yards and got a large portrait of the singer’s face inked on his upper back, true to his skin tone and all. The portrait-style tattoo on this guy’s back is pretty impressive, and you don’t want to miss it!

R&B star Chris Brown has his fair share of tattoos, but what might qualify as the most impressive fan tattoo is actually inked on the back of a white guy from the U.K. Go figure. Jamie Frater, who goes by @19junior89 on Twitter, got a pretty impressive tattoo of Breezy’s face inked on his left shoulder blade, and the tat really bears a striking resemblance to the 23-year-old singer. Let’s face it, you probably wouldn’t be surprised to find a tribute tat to Chris Brown inked on a teenage girl’s wrist or back, but a huge back tattoo on a grown man? That’s pretty amazing.

Number One Fan Proves His Dedication to Chris Brown

The Chris Brown tattoo on Frater’s back is a pretty close replica of the star’s visage, and somehow captures the overall “I’m a badass attitude” Breezy seems to sport on a daily basis. Inked on the upper-left-hand part of Frater’s back, near his shoulder, the fan tattoo really stands out against the guy’s skin and the rest of his tats. Unfortunately, in the pic of this guy’s Breezy-inspired back tattoo, you can also see his other tats, which include a classy “50 Ni**az” tattoo with a gun. Since Frater refers to Breezy as his “idol” on his Twitter bio, we’re guessing the tattoo of Breezy was intended to cement his role as the singer’s number one fan. If it doesn’t, we’d like to see what the actual number one fan had to do!

The Breezy Back Tat Called Fake

When Frater, of Leeds, U.K., posted the picture of his Breezy portrait tattoo on Twitter, most people thought the ink was a fake. “Photoshop is too good nowadays,” a user tweeted, to which Frater replied, “that tattoos not photoshopped :S.” The novelty of the back tattoo and its true originality seemed to reach as far as the Chris Brown camp, as Frater posted a reply to @mombreezy saying, “im that fan who had the portrait of chris, im glad you saw it :).” We guess Breezy’s mom must be proud to see her son’s face tattooed on another man’s back?

Chris Brown is a successful singer, rapper, dancer, actor and songwriter…but someone to be idolized? That’s debatable. Taking the 2009 assault charges filed against Breezy by on-again, off-again girlfriend Rihanna into consideration, hailing CB as an idol may be a little premature. Three years after their tumultuous break-up though, Rihanna and Chris Brown have reportedly been spending more and more time together lately – as friends. During an interview with Oprah during which she discussed everything from her sexy celebrity status to her newest cross and falcon tattoos, Rihanna revealed that Chris Brown remains the love of her life. We wonder what Brown’s current girlfriend, Karrueche Tran, thinks about this confession? The two just got matching tattoos, but in Chris Brown terms, that could signal the end of their relationship!