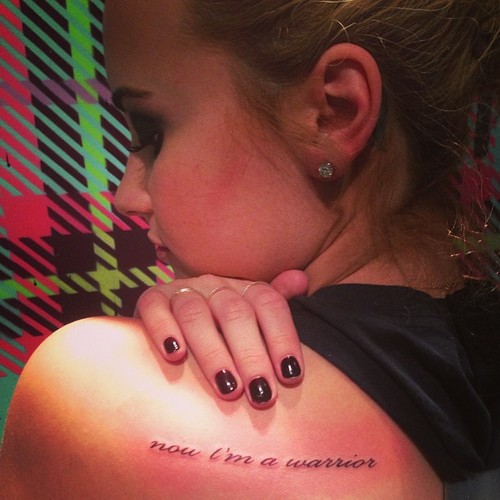 Demi Lovato took to Twitter to debut a brand new tattoo on May 15, 2013, and the ink reads simply “now I’m a warrior” in elegant black script. The tattoo, which is inked on the back of Demi’s left shoulder, is a mantra similar to many of the pop star’s other tattoos – including “stay strong,” “let go and let God,” and “you make me beautiful” – but this time Demi drew inspiration for the tattoo from her own lyrics. As much as Demi Lovato tries to set herself apart from other pop stars, she just couldn’t resist getting the typical pop star badge of honor – a tattoo of her lyrics inked on her body to celebrate the release of her new album. And like any good pop star tattoo, Demi’s was inked by the infamous Keith “Bang Bang” McCurdy in New York City!

Since her stint in rehab in 2010, Demi Lovato has been very open and honest about her struggles and how she works to overcome them on a daily basis, particularly in her music. Instead of feeling sorry for herself though, Demi has used music to build herself back up in the face of adversary. From songs like “Skyscraper,” in which Demi sings “Go on and tear me down / I will be rising from the ground / Like a skyscraper,” to the powerful tracks on her just-released album Demi, the once-dispirited pop star obviously feels stronger and more confident than ever. This is particularly evident in the lyrics to Demi’s new fighting ballad “Warrior:” 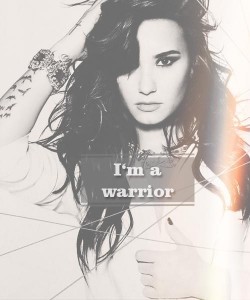 During an interview with Jimmy Fallon the day after her new album Demi was released, Demi Lovato explained the meaning of her “Now I’m a warrior” tattoo, saying: “I have a song on my album called “Warrior” and it’s a very meaningful song to me. It’s very heavy, the lyrics, but it’s an inspirational song as well. It’s a negative thing turned positive.” Referring to her newly-released album and new tattoo, the singer revealed to Fallon, “I’ve been through a lot and I’m really, really honest on this album. [Warrior] is a song that was really difficult for me to write, record and now release. [The tattoo] was kind of like a tribute to releasing an album as well as overcoming some really, really difficult things in my life.”

As you can see by checking out Demi Lovato’s new tattoo, her powerful “Warrior” lyrics and the rest of the songs on her brand new Demi album, just when you think the songstress is down, she’s definitely not out. And Demi clearly feels strongly enough about the message she puts across in “Warrior” that she decided to add a tattoo inspired by the lyrics to her already impressive tattoo collection. Many of Demi Lovato’s tattoos in the past have been inked as emotional reminders to herself that she is beautiful the way she is and that she can stay strong in the face of adversary, and these mantras are all very sweet and sentimental. Demi’s new “I’m a warrior” tattoo, however, is all fight and we love it!