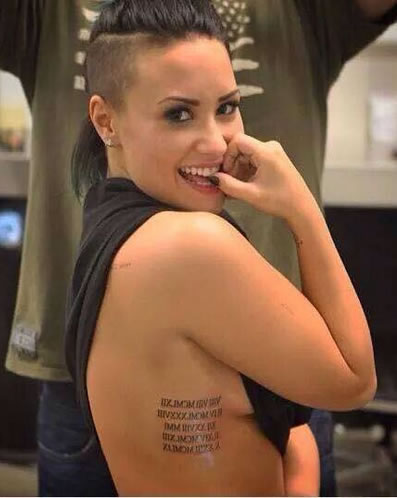 Less than a month after admitting that she wanted to get a new tattoo on her skull, à la Kelly Osbourne (eek!), Demi Lovato showed off some brand-new ink, but thankfully opted for her ribcage instead of her head for the location. Tattoo number 15 for Miss Demi is inked on the upper part of her left ribcage, opposite the “you make me beautiful” feather tat on her right side, and features five lines of Roman numerals inked in black and stacked on top of one another. Demi’s Roman numerals tattoo translates to 08.08.1962, 02.04.1988, 12.28.2001, 02.14.1963, and 10.23.1960, and stands for….you guessed it! The birth dates of the people Demi holds closest to her heart – her parents and siblings.

The meaning behind Demi Lovato’s tattoo remained a bit of a mystery at first, but it turns out the ink represents the birth dates of her closest family members, mom Diana, sisters Dallas and Maddie, step-father Eddie, and biological father Patrick. Demi has always admitted to being close with her family members, and even those she says her mother doesn’t approve of most of her tattoos, the two share a pair of matching “Stay Strong” wrist tats from when Demi was undergoing treatment at a rehab facility back in late 2010 to early 2011. Her family is obviously very important to her, and, even though she admitted to being unsure about some of the tattoos she has had done in the past, Demi’s birth date tattoo is probably one of her favorites now.

Demi Lovato’s birthday tattoo on her ribcage was inked close to one year after getting a small Roman numeral tattoo of the number three on her wrist in honor of her biological father, Patrick, who passed away in June 2013, after a long battle with cancer. Demi has revealed in the past that she didn’t have a great relationship with her father while he was alive, but says her Roman numeral wrist tattoo was a way for her to remember Patrick Lovato and his lucky number three. On the one-year anniversary of his death this past summer, Demi announced the creation of the Lovato Treatment Scholarship to help those struggling with mental health or addiction issues, and now Demi has another positive reminder of her father in the form of her birth date side tattoo.