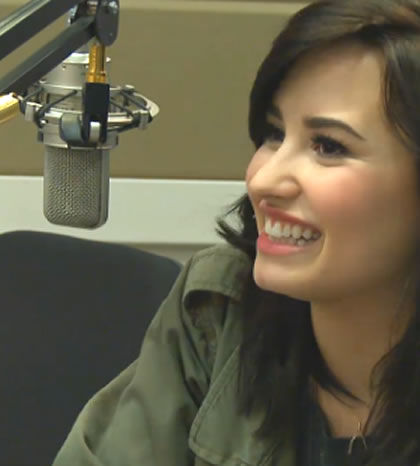 We all know that Demi Lovato is big time into the ink, but in a new interview with the radio station KTU, the pop star gives us the inside scoop on her tattoo addiction, regrets and plans for the future. Demi has mentioned in the past that she regrets some of her tattoos and may even consider removing a couple, but at the same time, she doesn’t seem too intent on slowing down with the tattoos either. In fact, she admits that she suffers from a bit of an addiction when it comes to tattoos, which is obvious judging by the ten or so she has inked across her body. “I took a break for a while because I kind of overdid it and got like eight in one year,” Demi said in a previous interview. But that was before she got the birds tattoo on her arm, and now the pop star appears to be back in action!

Demi Calls Name Tattoos “the Kiss of Death” in Relationships

Demi’s most recent tat is the large flock of birds she had celebrity tattoo artist Kat Von D ink on her forearm back in November 2012, and we can’t be the only ones who think it’s been far too long since she last got inked. Five months? That’s got to be some kind of record for her, but maybe she is just waiting until she finds the right tat. Don’t count on it being the name of her main squeeze at the moment though. When asked during the KTU interview if she would ever get someone’s name inked on her body, she responded, “I feel like that may be the kiss of death for a relationship. It doesn’t matter how much I love someone, I just wouldn’t want to jinx it.” She continued however, saying, “But you never know, I say that now and I have it next week. That’s how I am.”

Okay, so Demi may not be showing up with an “I heart Wilmer Valderrama” tattoo anytime soon, but what about that huge birds tattoo she recently got inked on her arm? You know you’re wondering if she’s planning on adding to it little by little and turning it into a full sleeve. When Demi was asked during the interview about the possibility of a sleeve tattoo in the future, she said, “No, no, no, that’s it,” which sounded convincing, but we saw those gears turning. Demi Lovato admits that she does have a tattoo addiction and doesn’t necessarily have tattoo “limits” per say. “I get one and them I’m like ‘oh, I shouldn’t have done that.’ And then I’m like ‘oh wait, I love it, I want more!’”

During the KTU interview, Demi was asked what inspired her to get the birds inked on her left arm, and her response was very un-Demi-like. Most of the pop star’s tattoos have been inspired by significant events in her life, such as struggling with bulimia and cutting, and finishing treatment in rehab. Regarding the birds arm tattoo though, Demi’s response was, “I don’t know, I just saw some birds in a picture that someone had tattooed on them, and I thought ‘oh wow those would be really cool oh my arm.’” We think they look pretty awesome too, and we can’t wait to see what tattoo Demi Lovato gets next! Stay tuned and we will keep you updated on all the pop star’s tattoos.