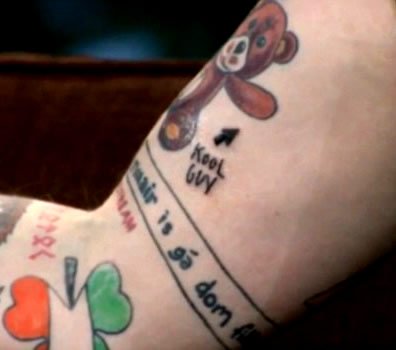 John Mayer was a guest host on The Late Late Show last week, and the highlight of the show was when John and musical guest Ed Sheeran revealed for the first time a couple of brand-new tattoos, which they each had designed by the other person. Appropriately, the two singers weren’t allowed to know what the design was or see the actual tattoos until they were on the air, at which point Ed Sheeran unveiled a tattoo on his right arm reading “kool guy,” with an arrow pointing towards himself, and John Mayer unbuttoned his shirt to reveal a tattoo of a small black and white cat head on the upper part of his chest.

This isn’t the first time Ed Sheeran has gotten a tattoo tribute to a blossoming relationship. The British singer has quite a few friendship tattoos inked on his arms, including a tattoo of a penguin inspired by the main character from a 1980’s children’s claymation series called “Pingu.” On the inside of his left bicep, Harry Styles has a matching tattoo that reads “Pingu,” which he says is a “bro tat” with Mr. Sheeran. According to Ed though, John Mayer’s tattoo of the cat head on his chest has a double meaning: “When you show it to kids, you can be like ‘Oh, it’s a kitty cat!’ And you can chat up women and be like, ‘I’m into p*****s myself.”

Being that John Mayer and Ed Sheeran are both virtually covered in tattoos, it wasn’t such a surprise that the singers opted for some new ink, and not being able to see the tattoos until they were in front of the camera made it all that much more interesting. Later on in the show, John sang backup for Ed’s hit song “Don’t,” a prerequisite to the duo’s performance at the Grammy Awards on Sunday night. Obviously, the fact that John Mayer used to date Taylor Swift, who is one of Ed Sheeran’s best friends hasn’t interfered with the guys’ relationship…this could be the beginning of a beautiful bromance!