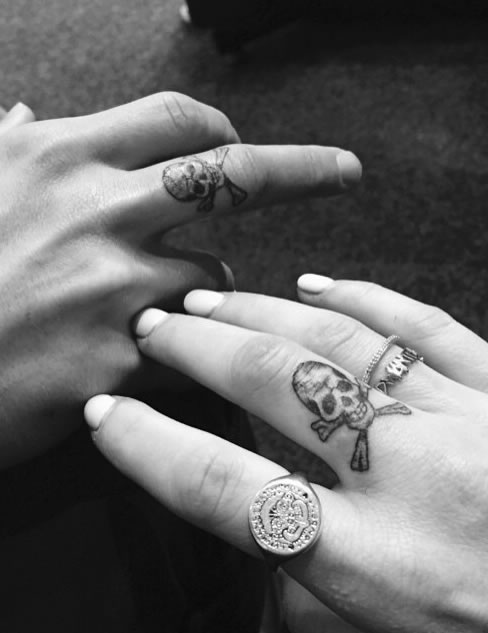 Ellie Goulding and boyfriend Dougie Poynter have been virtually inseparable since going public with their relationship last Spring, and now the two have sealed the deal with matching skull and crossbones tattoos on their fingers! Ellie Goulding’s new tattoo was first revealed in an Instagram post on March 30, in which you can see a man and woman’s hand next to each other, with (almost) identical skull tattoos on their middle fingers. How do we know it’s actually Ellie if we can’t see her face, you ask? Easy. She’s wearing one of her favorite rings in the pic, and you can just barely see part of her white arrow tattoo on her index finger.

It’s been nearly a year since Ellie Goulding debuted her last tattoo, an intricate lotus flower image she had inked on her ribcage in April 2014, but the singer has finally gone under the needle again, this time opting for a more ominous, but just as cool, design. Tattoo number seven for Ellie is inked on the lower section of the middle finger on her right hand, and features a small but detailed skull and crossbones design. The other person in the picture, who we are assuming is boyfriend Dougie Poynter, opted for a skull and crossbones image that almost matches Ellie Goulding’s tattoo, except that his skull faces out, while Ellie’s faces in towards her. 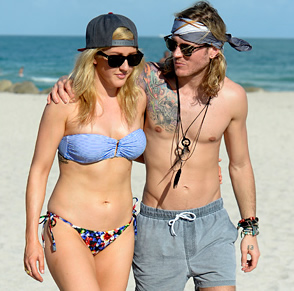 Neither Ellie Goulding nor Dougie Poynter are new to tattoos – the 28-year-old songstress has six other tattoos, including a large tat of three blackbirds she had inked on her collarbone as a tribute to the film Divergent, to which she contributed a song for the soundtrack, and the 27-year-old McBusted bassist sports a colorful full sleeve tattoo on his right arm that extends onto his chest, in addition to several other small pieces scattered across his body. We have to admit, even though intricate finger tattoos are becoming less and less unique ever since Cara Delevingne first debuted her now iconic lion finger tat back in May 2013, we still kind of love Ellie’s skull and crossbones tattoo!