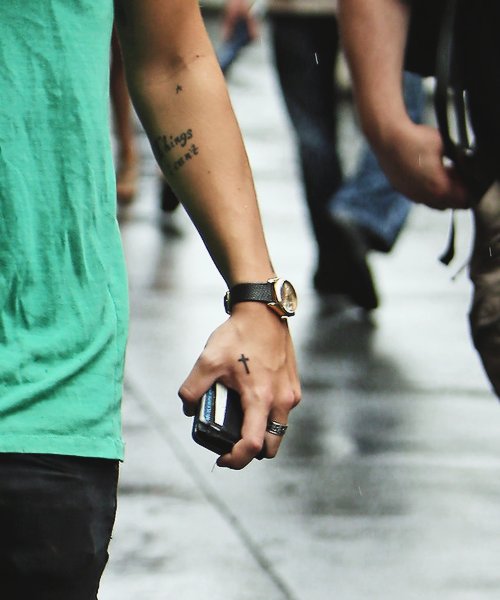 Zayn Malik grabbed headlines last week for the huge tattoo of his girlfriend, Perrie Edwards, he got inked on his arm, and in true One Direction style, Harry Styles has answered back with a brand-new tattoo of his own – a tiny black cross inked on the outside of his hand, near his thumb. Photos of Harry Styles’ new tattoo cropped up online on July 2, 2013, but the inked-up pop star hasn’t made any mention yet of the meaning of the cross tattoo in public. Like most of his other arm tats, including the filled-in black heart, padlock and “Things I can’t” tattoos the singer already sports, Harry Styles’ tattoo is inked in black on his left arm in a simple, relatively discreet design.

Harry Styles’ new cross tattoo is cool and all, but it isn’t exactly original. Not including the new hand tat, Harry Styles already has two tiny cross tattoos inked on himslef – one with the letter “M” below it and the other with the letter “K” below it – both of which are inked near his left shoulder on his chest. Harry hasn’t revealed the significance of the letters in his chest cross tattoos, but we’re guessing they were inked in honor of close friends or family members, considering the fact that the pop star has several other tattoo tributes to loved ones inked on his body. His numerous cross tattoos may also have something to do with his religion, since Harry Styles is Catholic and often wears a necklace with a crucifix on it.

Cross tattoos are becoming more and more popular among young and hip singers these days, and both Demi Lovato and Miley Cyrus sport simple black cross tats similar to the new ink Harry Styles has on his hand. There’s no word yet where and when Harry got his cross tattoo, but we’re guessing it came shortly after Louis revealed the new rope tattoo on his wrist and Zayn debuted his huge arm tattoo of Perrie – both of which were inked at a tattoo parlor in Glen Burnie, Maryland. Perhaps Harry’s tattoo was even inked on the same day! There’s nothing wrong with a little competition among friends, and when it comes to the One Direction boys, upping the ante involves going under the tattoo needle. Stay tuned to find out more about Harry Styles’ cross tattoo!

One Response to: Harry Styles’ Cross Tattoo on His Hand