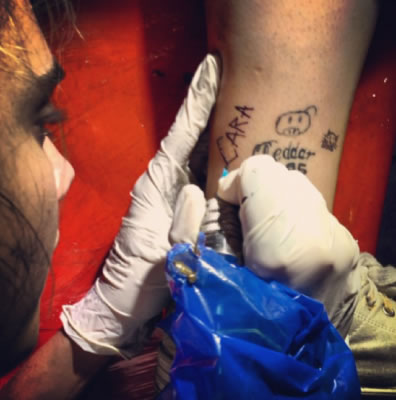 Just when we thought Harry Styles was finally moving away from those random scribbly tattoos he allowed his friends to ink on his body, rumored girlfriend Cara Delevingne has decided to try her hand (again) at tattooing, and we’re afraid Mr. Styles may be her next victim! During a trip to Brazil this week, the British model hit up the Lucky Seven tattoo parlor in Rio de Janeiro, but she wasn’t the one who went under the needle. Apparently, Cara convinced one of her pals to let her ink her name on them, and the result was a pretty terrible looking tattoo reading “Cara” in capital letters. The model shared a photo of her rudimentary work on Instagram, along with the caption: “Thank you Deborah! My second time giving a tattoo.” Poor Deb.

As Cara said herself, this isn’t the first time she has turned the tattoo needle on someone else. After getting a huge hand tattoo of her initials “CJF” inked by “Bang Bang” McCurdy back in May, the model returned the favor, inking her initials inside a heart on Bang Bang’s leg. After the his and hers tattoo session was over, Cara posted the pic online with the caption: “Me tattooing a tattoo legend!! You must be crazy Bang Bang!” It’s true, Bang Bang must be crazy, because Cara’s first attempt at tattooing was even worse than her second. In fact, the only other person besides Bang Bang and Deborah we can think of that would let Cara Delevingne tattoo them is…Harry Styles.

Harry Styles’ tattoos scattered across his body number in the 40s, and the majority of them are crude scribbles, many of which were done by Harry’s non-tattoo-artist buddies (seriously??). English singer-songwriter Ed Sheeran, for example, is responsible for inking Harry’s padlock tattoo, which some people say looks more like a Pop Tart or handbag, and the One Direction singer is apparently no longer a fan of the tiny wrist tattoo.

“I regret [the padlock tattoo] on my wrist here. I regret this. I mean, these are just crap. There are some that my friends have done and some that are just awful.”

Despite the fact that Harry Styles admits he regrets letting his friends use him to experiment with tattooing, we have a feeling the inked-up singer may have a hard time turning down new (and free!) tattoos in the future. And now that he and the wanna-be tattoo artist Cara Delevingne are rumored to be dating, we’re wondering if Harry will be her next victim, er…client.

One Response to: Watch Out Harry Styles, Cara Delevingne May Want to Ink You Next!