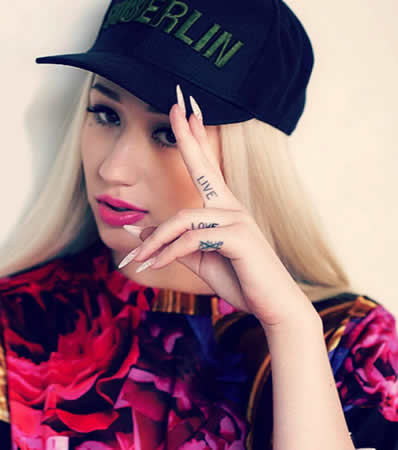 Australian rapper Iggy Azalea has three tattoos inked in black on the outside of the middle, ring and pinkie fingers of her left hand that read “LIVE.LOVE.A$AP.,” with the “A$AP” part of the tattoo crossed out with a thick black X. Iggy Azalea’s tattoos were apparently inspired by the title of a 2011 mixtape released by the rapper’s former boyfriend, Harlem emcee A$AP Rocky, whom she dated for just over a year, between 2011 and 2012. Iggy’s “LIVE.LOVE.A$AP.” tattoo was inked in late 2011, while the couple was still together, and the name A$AP, which is actually stylized as “A$VP” in the finger tattoo, stands for “Always Strive and Prosper.”

After Iggy and A$AP Rocky suffered a nasty falling out in July 2012, Iggy insisted that she hated her ex for months after the break-up, and even crossed out the “A$AP” portion of her “LIVE.LOVE.A$AP.” tattoo, which definitely made more of a statement than just having the tattoo removed. However, the rapper has since admitted that she has a new-found respect for Rocky, even though she knows they will probably never really be friends. Iggy opened up about the difficulties of her relationship with A$AP Rocky in “Rolex,” a bonus track off her major-label debut The New Classic, which includes the lyrics “I got you tatted, you took off before the ink dried on my hands.”

Iggy Azalea obviously got her “LIVE.LOVE.A$AP.” finger tattoos as a tribute to her love for her then-boyfriend, but perhaps there was a deeper meaning behind the ink. “I was reading about tattoos, cause I like to know why I do crazy things,” Iggy once said during an interview. “And they were saying how making something a part of your body is a way for you, in your mind, to try and control something.” Perhaps Iggy was trying to control her relationship with Rocky by getting his name tattooed on her finger?

Whatever she once felt for A$AP Rocky that made her go under the needle – love, control, etc. – the feeling is no more. “I definitely hated his guts and he hated my guts for a few months…but once you’ve had a few months to look at things in retrospect you realize, maybe you don’t hate that person, you hate whatever caused the break-up, and you both failed in the relationship,” Iggy said recently. “I don’t call him up and have conversations and I wouldn’t say Rocky is my friend, but there are times I’ve congratulated him on things he’s achieved…We’re cordial and I respect him.”

Deciding to Cross Out A$AP’s Name

Up until recently, Iggy has said that she has no plans to remove the A$AP Rocky tattoo on her fingers, telling Complex magazine in 2013: “I f**king loved him, I know he loved me too. I felt like he was somebody I could count on who loved me for being me, and I don’t want to forget that.” Iggy did, however, go under the needle to draw an X over A$AP Rocky’s name on her pinkie finger, but explains why she didn’t go all out with it. “I would sacrifice a quarter of a pinkie [finger] for those memories,” Iggy said about her relationship with A$AP Rocky. “That’s why I didn’t cross it out all the way, because if I’d covered it up all the way, that says I’m embarrassed. You shouldn’t be ashamed of the trials of becoming an adult.”

Despite these claims, during an interview with Hot 97 in April 2014, Iggy discussed possibly removing her “LIVE.LOVE.A$AP.” tattoo, saying “I plan on doing laser, but it’s just that laser kinda takes time and it also takes you having a schedule that involves you going in more than one time, so I’m like, just for now, just know it’s done. It’s definitely over, and I’ll get to [tattoo removal]. It’s on my to-do list.” It’s obvious Iggy has moved on from her break-up with the Harlem emcee, and apparently so has Rocky, who is now rumored to be engaged to model Chanel Iman. Curious about whether Iggy would ever go under the needle for another relationship tattoo in the future? The answer is definitely “no.” When asked during the same Hot 97 interview if she would ever get another man’s name tattooed on her, Iggy said, “No, I never would do that again. Never again.” At least she’s learned her lesson!