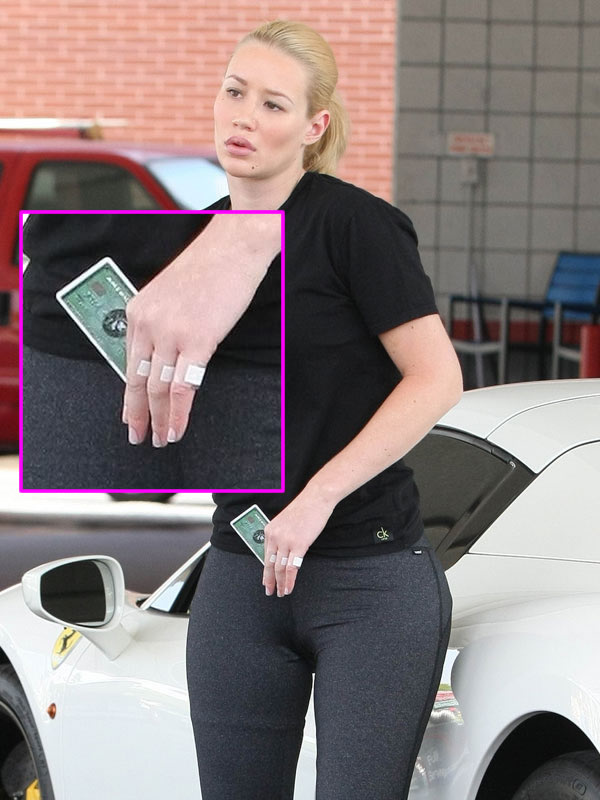 Last December, Iggy Azalea was photographed leaving a tattoo removal clinic in L.A. with a tell-tale white bandage covering her crossed-out “A$AP” tattoo, and now the rapper has been spotted with bandages over the “Live,” “Love” and “A$AP” tattoos on her left-hand middle, ring and pinky fingers. Despite saying in the past that she would never remove her A$AP Rocky tattoo, even though the rapper and her Harlem emcee ex called it quits several years ago, Iggy remarked in an April 2014 interview that she planned to get the tattoo tribute lasered off eventually. Last December may have marked Iggy’s first trip to the tattoo removal clinic, but now it appears that she is close to having the entire tattoo removed!

Iggy Azalea was spotted leaving the Epione Cosmetic Surgery Center in Beverly Hills on July 7, and if you look at her left hand, you can see that her famous “Live. Love. A$AP” tattoo is covered by three small white bandages. Iggy, who announced her engagement to Lakers star Nick Young just last month, apparently began the tattoo removal process in December, and even though she says she still loves A$AP Rocky and has mad respect for the rapper, it makes sense that the 25-year-old would want to remove his name and album title from her finger, which just happens to be on the hand where she’ll soon be sporting a wedding band!

Apparently crossing out the “A$AP” part of her “Live. Love. A$AP” tattoo when the couple broke up in 2012, wasn’t enough for Iggy. Now she can start fresh with Nick Young without a constant reminder of her ex-flame inked on her hand. What do you all think of Iggy Azalea’s decision to remove her “Live. Love. A$AP” hand tattoo??