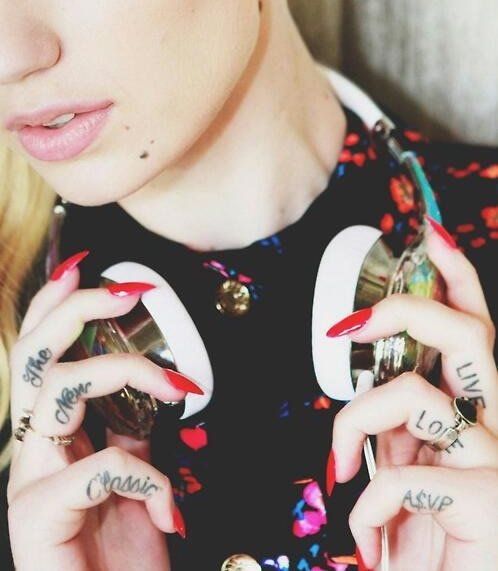 Around the same time that Iggy Azalea got the unfortunate “LIVE.LOVE.A$AP” tattoos inked on her left-hand, the rapper added another three-part tattoo to her right hand reading “The New Classic” in an elegant black script font. Just like Iggy’s “LIVE.LOVE.A$AP.” tattoo was meant as a tribute to the 2011 mixtape released by then-boyfriend A$AP Rocky, Iggy Azalea’s “The New Classic” tattoo was inked in honor of her own major-label debut album by the same name, which was released in April 2014. Iggy Azalea’s tattoo was inked in Los Angeles in 2011, when she first mentioned plans for the album (which was delayed for a few years due to label conflicts), and is located on the middle, ring and pinkie fingers of the singer’s right hand.

Unlike the “LIVE.LOVE.A$AP” tattoo on her left hand, which is a constant reminder of her failed relationship with the Harlem emcee, and which Iggy has recently talked about getting removed, the singer’s “The New Classic” tattoo is a positive homage to her first studio album, which included the hit single “Fancy,” and debuted at number three on the Billboard 200 chart, becoming the highest-charting female rap album since Nicki Minaj’s Pink Friday: Roman Reloaded. During a 2013 interview with Fuse, Iggy explained the meaning behind the title The New Classic (two contrasting words), saying that, over time, the “new style” she presents in her music will become legendary – or classic.

Hip hop as a culture is evolving, and we are starting to hear different sounds in hip hop and rap music sonically. We are starting to talk about different topics and see different characters. I think these sorts of things are going to be classic or the norm in a few years; it won’t necessarily be a talking point anymore, and so I wanted to do something that was a time capsule, or reflective of my generation of music, and what I think will be a classic sound one day. I want people to talk about that and hear different types of music in my albums.

I think people think of classic and they think of a Nas record or a Jay-Z record or The Chronic; what makes something classic is when you hear it and have that moment that is a time capsule. When I say “The New Classic,” I just want to make records that give you that moment for fans that they can remember where they were when they heard it.

Working Towards Releasing Her Debut Album 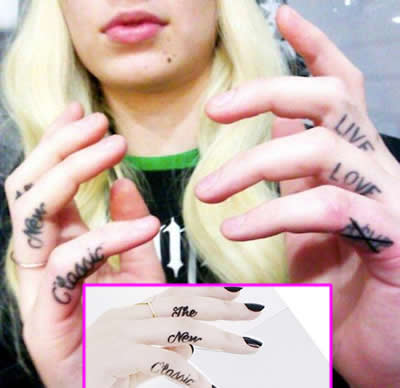 Iggy Azalea, born Amethyst Amelia Kelly, grew up in Australia cleaning hotel rooms and rental properties with her mother to scrape together some extra cash, before she moved to Miami when she turned 16 and began to consider a serious career in the music industry. For the next several years, she lived in various southern U.S. cities, including Atlanta, Georgia and Houston, Texas, where she first gained recognition for the music videos she posted on YouTube of her freestyle songs “Pu$$y” and “Two Times.” It wasn’t until 2012 that Iggy finally released her debut mixtape Ignorant Art and signed with T.I’s record label imprint Grand Hustle, and it was several years and a few label conflicts later that her debut studio album The New Classic was released under Virgin EMI and Def Jam Recordings.

Being that releasing The New Classic was a huge leap forward for Iggy Azalea’s music career, it only makes sense that she would want to get a permanent reminder of the album inked on her body, much like Katy Perry adds a new tattoo to her collection for each album and world tour she completes. We’re guessing that, based on her obvious love for tattoos, Iggy might get a new tattoo for each of the albums she releases in the future. What do you all think??