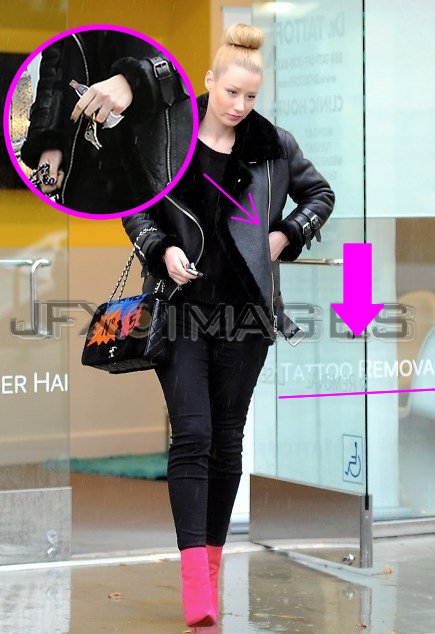 Iggy Azalea made quite a statement when she had a big black X inked through her “A$AP” finger tattoo after the rapper and her Harlem emcee boyfriend A$AP Rocky called it quits, but it seems Iggy wanted to make a more significant gesture for her new Lakers beau, Nick Young, by removing her “A$AP” finger tattoo altogether! According to photos of Iggy Azalea snapped on December 2, the inked-up rapper visited the Beverly Hills office of tattoo removal king Dr. Tattoff, and left with a bandage on her left pinky finger, where A$AP’s name used to be.

Despite Iggy’s pretty vindictive decision to cross out the “A$AP” portion of her “LIVE.LOVE.A$AP.” finger tattoos after the couple split up, the rapper has maintained throughout the past couple of years that she has a new-found respect for her ex-boyfriend, and has even said that she would never consider removing the ink. During an interview in 2013, she said:

I f**king loved him, I know he loved me too. I felt like he was somebody I could count on who loved me for being me, and I don’t want to forget that. I would sacrifice a quarter of a pinky finger for those memories. That’s why I didn’t cross it out all the way, because if I’d covered it up all the way, that says I’m embarrassed. You shouldn’t be ashamed of the trials of becoming an adult.

Iggy must have had a change of heart though, because during an April 2014 interview, she said that she planned on getting her “A$AP” tattoo lasered off, and now it appears the rapper has finally checked that little item off her to-do list. We’re guessing the deciding factor behind Iggy Azalea’s tattoo removal was her new Lakers boyfriend, Nick Young, who Iggy has been dating since November 2013.

It’s obvious Iggy and Nick aren’t just playing games; the couple just bought a house together (which was previously owned by pop star Selena Gomez), and the Nick himself has been very candid about his relationship with Iggy, saying they have talked several times about getting married and starting a family together. As the basketball star says, “Growing up I always wanted to be married and have a family, and it’s difficult. I ask [my parents] every day how they do it. I’ve never been with someone like [Iggy]. So, I’m taking it as a challenge.”

So what you do think? Has Iggy learned her lesson about permanent relationship tattoos, or will she step out soon with a new “Nick Young” addition to her “LIVE.LOVE.” tattoo? Stay tuned to find out!