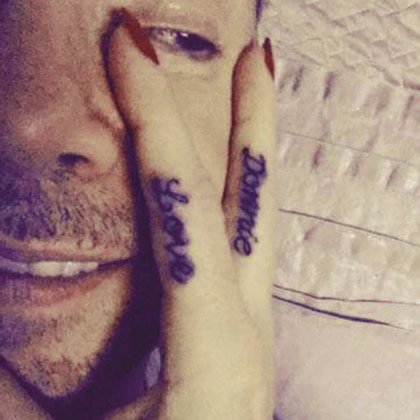 Jenny McCarthy and Donnie Wahlberg tied the knot last summer, and now in addition to a wedding ring, Jenny is sporting a fresh tattoo on her fingers dedicated to her new hubby and former New Kids on the Block hunk. Jenny McCarthy took to Instagram on May 11 to show off her new tattoo – the words “Love” and “Donnie” inked in a black script front on her fingers – and when asked by fans on Twitter if the ink was real, the former “View” co-host and current SiriusXM host quipped, “I’m not used to saying the words ‘it’s real,’ but yes, it’s real.”

So now that we know Jenny McCarthy’s tattoo is real (unlike her hair, boobs, and various other body parts), we’ll move on to the meaning behind the new ink. When the 42-year-old first posted an up-close photo on Instagram of her new tattoo, she captioned the snap “Cuz I do…” referring to the “Love Donnie” ink adorning what appears to be the index and middle fingers of her right hand. Pretty simple, right? In the Instagram photo, her fingers are resting gently on Donnie Wahlberg’s face, and he looks like he’s a fan of Jenny’s new ink, too! 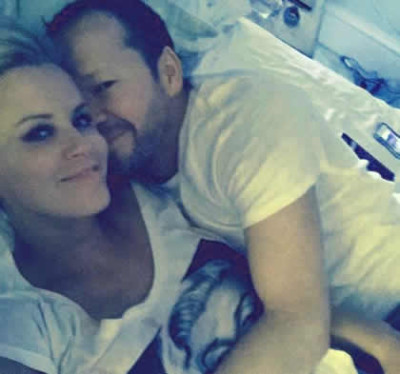 According to reports, Jenny McCarthy and Donnie Wahlberg have been virtually inseparable since they said “I do” in a ceremony outside of Chicago last summer, and just last October, Jenny said in an interview that, despite the numerous long-term relationships she has had in the past, she had never “made love” until she met Donnie. How sweet! All we can do now is hope that Jenny McCarthy’s “Love Donnie” finger tattoo doesn’t go the way of Iggy Azalea’s “A$AP Rocky” tat and end up crossed out (or removed).