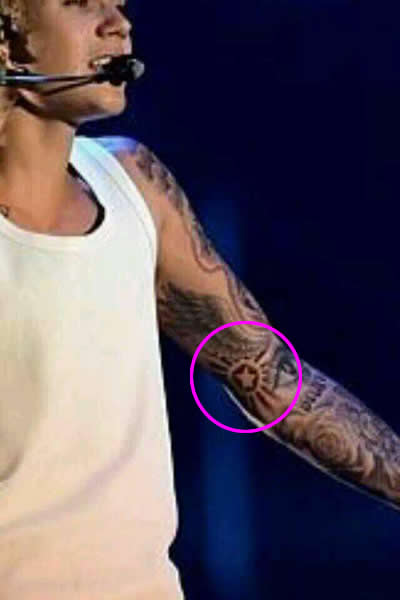 Justin Bieber has just released his “Confident” collaboration with Chance the Rapper, and he was apparently so confident of the song’s success that he decided to add a star tattoo to his arm. During a stop in the Philippines on December 10, 2013, to raise funds for typhoon victims, the pop star accidentally revealed a small tattoo of a star with rays around it on his arm. Justin Bieber’s star tattoo is inked in black and white and is nestled between his angel wing and rose tattoos on his left arm, We’re guessing the tat is probably the final addition to the singer’s full sleeve, which he has been working on for the better part of this year.

Although the Biebs is usually all about flaunting his new tattoos, he is keeping this tattoo of a star under wraps for some reason. It was thanks to eagle-eyed fans Mariah Cooley and Holly that we spotted Justin Bieber’s tattoo in the first place, and the singer hasn’t spoken in public about the new addition to his collection, nor has he posted a picture of the ink to his Instagram or Twitter accounts, which seems to be his favorite past-time. This isn’t the first time Justin has celebrated a new release with a tattoo though; in June 2012, the pop star revealed the very first addition to his now-full-sleeve: the word “Believe” on the inside of his left arm as a tribute to his third studio album.

Another possible interpretation of Justin’s star tattoo is that the ink may have been inspired by Radiohead’s Against Demons tour, which ran from 1996 to 1998. If you take a close look at the star in the singer’s arm tat, you’ll see that the ink features a white star inside a filled-in black circle with rays around the circle, and that the bottom of the star is sort of imperfect. This image is almost a perfect match for Radiohead’s Against Demons symbol, which almost looks like a sand dollar, and can also be found on singer Krysta Cameron’s arm. Nineteen-year-old Justin Bieber was only two when Radiohead embarked on its Against Demons tour in 1996, so this interpretation may be a stretch, but it’s certainly possible! 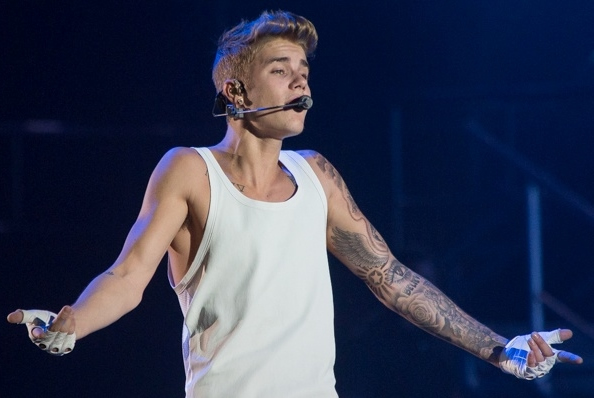 Justin’s star tattoo comes as his loving mother, Pattie Mallette, admits that she doesn’t like her son’s tattoos, although she said she sometimes goes back and forth when it comes to this subject. “I wish he didn’t have tattoos,” she responded to a fan on Twitter, “but I do like them. I’m torn. Weird right?” Not so weird. We love Justin Bieber’s tattoos, but we’re a little skeptical about some of them…it doesn’t matter that it’s a tribute to his mom, that eye tattoo is just downright creepy! What do you think of Justin Bieber’s growing tattoo collection and the new star tat on his arm?

3 Responses to: Justin Bieber Secretly Adds a New Star Tattoo to His Sleeve