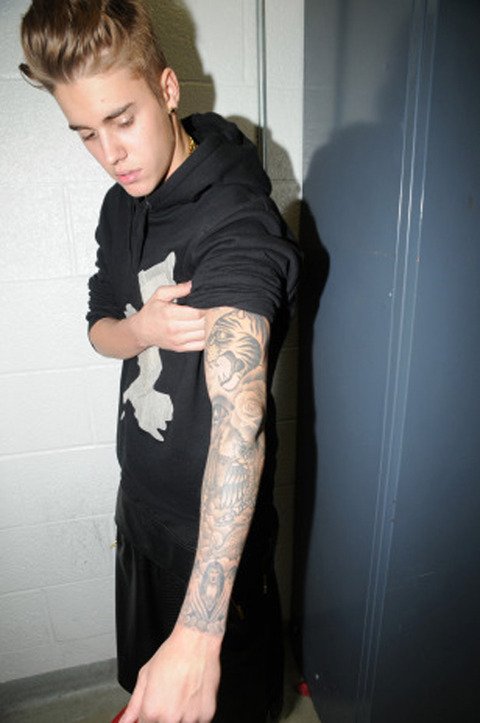 New pics of Justin Bieber’s jailhouse tattoo photo shoot have surfaced online, showing many of Justin’s 30 tats. The pop singer has had a busy couple of months, what with all the criminal charges currently being filed against him in the United States and Canada, and we have a feeling that, at this rate, the singer’s next tattoo may just end up being a prison-style teardrop tat (not really). Justin’s recent misdemeanor arrest in Florida on suspicion of resisting arrest, driving under the influence, and driving without a proper license (while drag racing) marked his first arrest, but certainly not his last. On the same day the lab test results and details of his sobriety test from the drag racing incident were released, the pop star was booked on an assault charge in Canada for allegedly striking his limo driver over the head multiple times in Toronto. Oh, and then there’s that pesky egg-throwing investigation…Fire up the tattoo gun, Bang Bang – one teardrop tattoo comin’ right up!

The authorities finally appear to be closing in on the Biebs, but the 20-year-old is far from concerned and doesn’t mind showing it. According to Florida police, Justin was “excited,” “insulting,” “cocky,” and “used profanity” when he was arrested on suspicion of drunk driving and drag racing, and, when an officer told him he reeked of marijuana, he smartly replied, “Yeah, we were smoking all night at the studio.” Phew! Now that takes some cojones, man. In addition to these most recent criminal charges, Justin has also faced the wrath of the authorities for a number of other “pranks” over the past year, including urinating in a New York restaurant’s mop bucket, attempting to smuggle a monkey into Germany, and tagging a hotel with graffiti and visiting a brothel, both in Brazil. 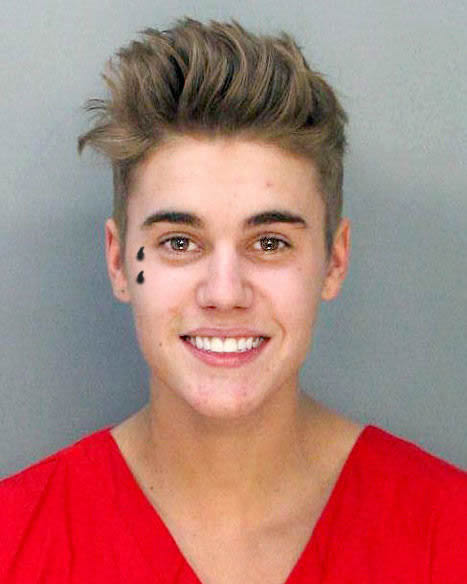 Although it would surely break the hearts of millions of Beliebers, it might be a good move for Justin to take a break from the music industry and open a tattoo parlor with his dad, which has apparently been a life-long dream of his. If he wants to set up shop in the U.S. though, that could be a big problem, because Justin’s recent bad behavior has not escaped the good people of the United States of America. In fact, there is an online petition to deport the “dangerous, reckless, destructive and drug-abusing” singer that has already received 105,978 signatures – more than enough to earn an official review by the Oval Office. Bieber could be heading back to his homeland before we know it!