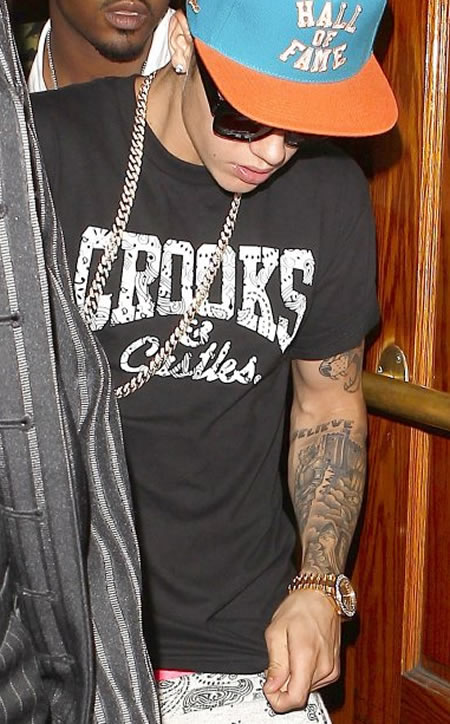 Justin Bieber has finally reached his goal and completed his half sleeve tattoo with some new ink featuring what looks like a castle surrounded by thrashing waves. The waves in the arm tattoo meet up with the “Believe” tat the singer sports on the inside of his elbow, and the black and white ink also fits in alongside the tattoo of a knight holding a sword that Bieber got inked just last month. The final addition to the singer’s sleeve tattoo was spotted on June 17, as Bieber was leaving the Laugh Factory comedy club in West Hollywood. Overall, Justin Bieber’s tattoo fits in perfectly with his other arm ink to form a good looking sleeve on his left forearm.

As soon as Justin Bieber debuted his tiger, angel and koi fish tattoos all at once, we all knew the pop star would eventually spring for at least a half sleeve on his left arm. It was inevitable. But a castle and waves? What significance does this particular tattoo hold for the 19-year-old singer? Some of Justin’s more recent tattoos have followed a similar theme, including the crown tat on his chest, the knight tattoo inked on the inside of his arm, and now the castle and waves. We have said before that Justin Bieber sees himself as the prince of pop, and the knight tattoo led us to believe that he may be referring to the King Arthur/Excalibur story. Perhaps Justin Bieber’s tattoo of the castle is yet another reference to his success in the music industry.

Justin Bieber May Opt for a Full Sleeve 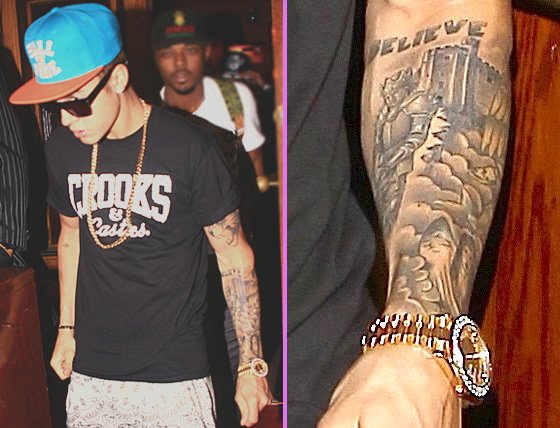 The new castle and waves ink comes shortly after was booed at the Billboard Music Awards as he accepted his Milestone Award. Following the awkward and embarrassing moment, Bieber made the claim that “This is not a gimmick. I’m an artist and I should be taken seriously,” probably referring to all the PR trouble he has encountered of late. Well, apparently Bieber really meant it when he said he should be taken seriously, because with a collection of tattoos that includes a crown, a knight and a castle, it’s obvious the singer means business. And with that lonely tiger up there on Bieber’s left bicep, there’s bound to be a full sleeve tattoo in the pop star’s future, so stay tuned!