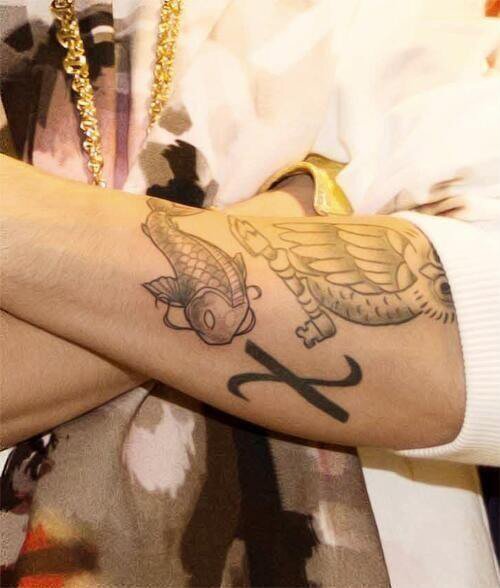 Justin Bieber is well on his way to having a full sleeve on his left arm, thanks to the addition of his koi fish tattoo, which he revealed during the meet-and-greet for his Copenhagen tour on April 20. We weren’t surprised to see that Justin’s new tattoo was inked on his left arm, which he seems intent on covering with tattoos since getting the controversial owl tattoo in October 2012 and the Greek “X” symbol this past February. Justin Bieber’s koi fish tattoo is inked in black and white, like most of his other tattoos, and features a traditional koi fish with some pretty ornate detail. The koi fish is inked directly below Justin’s owl tattoo, and the head of the fish faces the singer’s “X” Christ tattoo.

There’s no question that Justin Bieber loves showing off his new tattoos, but he doesn’t always talk about them in public, which leaves us guessing about the meaning of the ink. In some cases – like Justin’s owl tattoo – is takes quite a bit of digging, but the meaning of a koi fish tattoo is actually pretty straightforward. For most people, koi fish represent good luck or good fortune, which Justin Bieber could probably use a bit of considering all the trouble he has found himself in lately. The koi is also associated with perseverance, strength and courage, and the fish is surrounded by ancient myth and legend in China, Japan and other Asian cultures.

Justin Bieber Could Use Some Good Luck 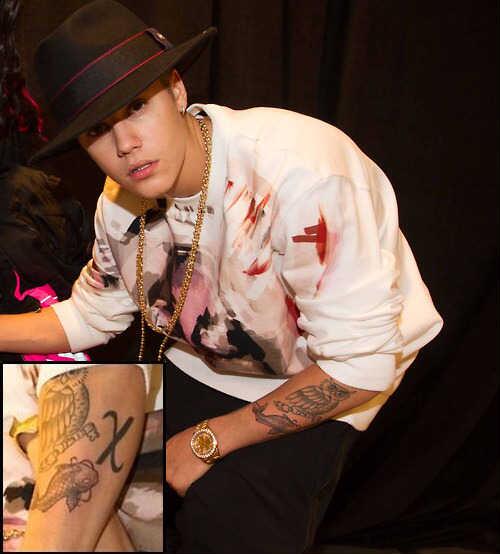 According to Ancient Chinese legend, the koi fish was capable of swimming against a stream’s current, and even had the ability to climb waterfalls, symbolizing a person aspiring to something bigger and better. We already know that the Biebs considers himself something of a pop prince – thanks to his crown chest tattoo – so maybe he is now aspiring to be the king of pop. Either way, Justin Bieber could definitely use a little luck in his life. Judging by all the drama he has stirred up recently, including some mishaps with the paparazzi, a monkey and being called a spoiled brat by his London tattoo artist, a little koi fish good fortune could be just what Justin Bieber needs! 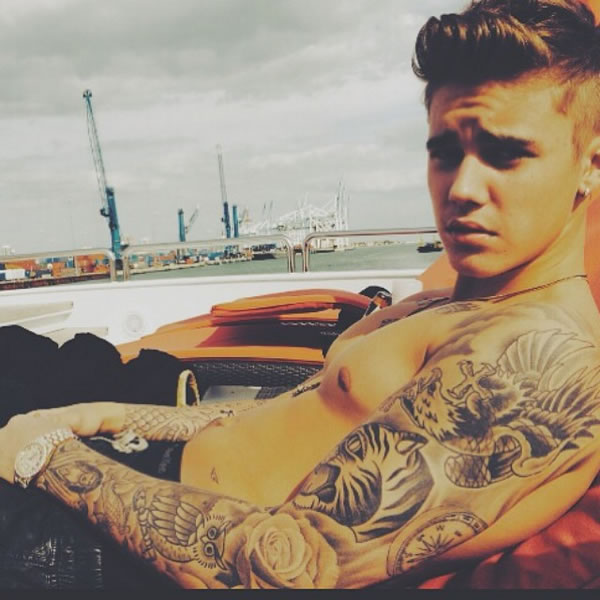 Because of ancient legends involving a koi fish being able to swim upstream, the direction the fish is facing in a koi tattoo can actually have a bearing on the meaning of the tattoo. In most cases, if the koi fish is depicted as swimming upstream, the meaning could represent the wearer struggling against a hardship in his or her life. If the koi is swimming downstream, however, the meaning of the tat could be that the person has already overcome an obstacle and is now enjoying easier times. Because of the way Justin Bieber’s koi fish tattoo is inked, with the tail in the lower left and the head in the upper right, it appears that the singer has found himself swimming against the current these days.