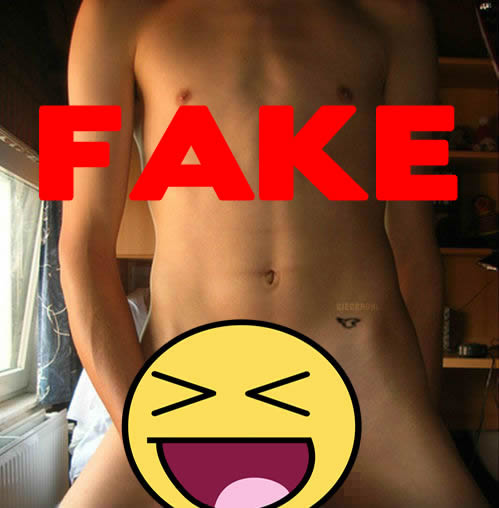 Risqué pictures of what appeared to be Justin Bieber were leaked online this week, portraying full-frontal images of a male that looks an awful lot like the Biebs – tattoos and all. Bieber took to Twitter on October 9 to bash the thief that stole his computer and camera from his tour manager’s hotel room during a show in Washington, which is apparently where the pics of Bieber in the buff came from. The Biebs then got into a public Twitter argument with someone who claimed to be the thief, which convinced us all even more of the credibility of the photos. The final twist in the Bieber picture scandal? We all got punked by Justin Bieber.

Someone leaked at least two personal pictures of Justin Bieber online this week, and they’re not the coy “oops-but-aren’t-I-super-sexy?” pics like Miley Cyrus’ suggestive bathtub photo – which she probably “leaked” to the media herself. These photos are full-frontal shots of someone who looks an awful lot like Bieber in the buff, and required some serious blurring action to cover up. One photo shows what could be Justin Bieber kneeling on a bed, wearing nothing but the telltale seagull tattoo inked on his left hip, posted on Twitter just hours after the Bieb’s personal computer and camera were supposedly stolen from his tour manager’s room during a show in Washington. In another picture, the person is turned to the side a little so that you can see the Hebrew ribcage tat that Bieber got in 2011. The tattoos are what sealed the deal for most people, because let’s be real – what other guy has a tiny outline of a bird tattooed on his hip? When the photos first hit the web, the 18-year-old singer doesn’t seem too pleased that the images landed in someone else’s hands, and who would? However, after letting the scandal simmer for a few days, the Biebs revealed that the revealing photographs were all just a publicity stunt to promote his new video with Nicki Minaj – “The Beauty and a Beat.”

Shortly after “discovering” that his computer and camera were stolen from his manager’s hotel room, Bieber took to Twitter on October 9 to give the thief a piece of his mind. “Yesterday during the show, me and my tour manager Josh had some stuff stolen. Really sucks. People should respect other’s property,” the Biebs tweeted. “I had a lot of personal footage on that computer and camera and that is what bothers me the most. #lame #norespect.” Now we all know what kind of personal footage JB may have been referring to – the kind that you don’t want your mom to see when she searches for the top news stories of the week. It wasn’t until October 12 however, that the Biebs revealed that the picture scandal was all a lie, carefully crafted as a means of promoting his new music video. He posted this message on Twitter yesterday: “Since I was 14, I have had a lot of things said about me, from dying, to taking hormones, to dying again, to stuff about my family, to saying I had a baby with a woman I never even met. Nude pics, drugs, my family, my character…but today…today I get to be in on it.” Touché, Justin Bieber, touché. 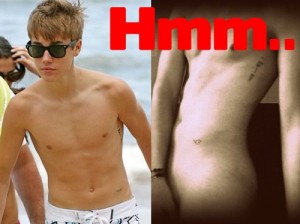 Are the Pics of Beiber in the Buff Real? Nope.

For all the people who said the racy Justin Bieber photos were real, there were just as many people who claimed the pics were a fraud. Their “evidence” though – which involves the shape and size of Bieber’s…belly button and nipples – was less than scientific, and it was just as plausible that Bieber snapped some shots intended for his leading lady, Selena Gomez, and never deleted them off his camera or computer. How many other celebrities have fallen victim to similar mistakes? Chris Brown, Rihanna, Blake Lively, Scarlett Johansson, Mila Kunis and Christina Aguilera, to name just a few. And sure, Bieber’s seagull tattoo and Hebrew tat could have been Photoshopped onto the torso of the man in the pic, but they sure did look like the real deal! We’re just thankful there aren’t actually naked pictures of the Biebs floating around on the Internet.