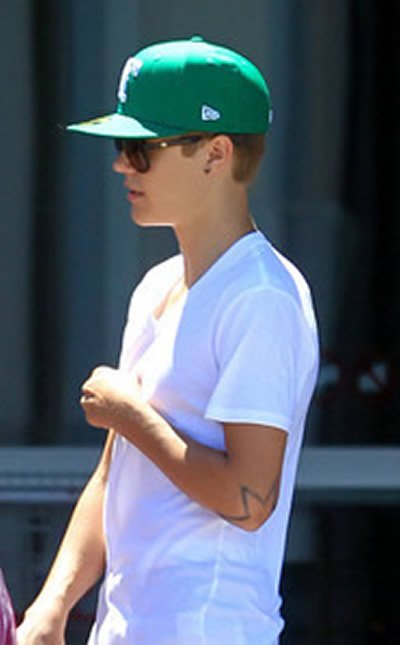 Justin Bieber got a new tattoo! Sike.  The  fake Justin Bieber tattoo is a large star tat on his left elbow, drawn sometime in May of this year. Although the exact date Bieber got the fake tattoo remains unknown, the pop star posted pictures of himself on Twitter in late May without any mention of the elbow tattoo. This drove Bieber fans crazy as they wondered whether Justin Bieber’s new tattoo was real or fake. Since more recent pictures of Justin Bieber’s tattoos still show the large star tat, we even thought it was the real deal!  However, the elbow tat turned out to be fake.

Justin Bieber’s fake tattoo was a thick outline of a five-point star covering his entire elbow and slightly extending onto the back of his left tricep and forearm. What would have been his third tattoo so far, Bieber fans are speculating that Bieber’s star tattoo may represent the beginning of the 17-year-old star’s potential tattoo addiction. Bieber certainly wouldn’t be the first celebrity to decorate his body with ink, although he may be one of the youngest.

The first pictures of Justin Bieber’sfake star tattoo showed the pop star pond fishing in Texas over Memorial Day weekend with the star tattoo visible on his elbow. Bieber was in Texas with girlfriend Selena Gomez, visiting Gomez’s family during the holiday, so there’s a chance Bieber got the fake tattoo during the trip. Since late May, more pics of Justin Bieber’s tattoos have cropped up, showing the star tattoo on Bieber’s elbow and Justin Biebers Jesus tattoo, although the pop star doesn’t seem to have any explanation to offer his curious fans.  Probably because he was just messing around.

During a recent trip to Israel, Bieber and his dad, Jeremy, got matching Hebrew tattoos meaning “Jesus.” Does that mean Justin Bieber’s new star tattoo is a memorial to the Lonestar State, home to Selena Gomez’s family? Probably not; Bieber’s tattoo meaning seems to have something to do with his family, since the tattoo on Bieber’s elbow actually matches the star tat his dad also has on his left elbow. Although there is speculation that Justin Bieber’s elbow tattoo is fake, which wouldn’t be surprising given his infamous prankster personality, the start tattoo certainly looks real!

Justin Bieber tattoo pictures show the teen pop star with three tattoos to date, all of which match tattoos his dad has: the star tattoo on Bieber’s elbow, the bird tattoo on his hip, and the Hebrew tattoo on his ribcage. Since Bieber still isn’t old enough to get tattoos without the permission of his parents, it seems Bieber’s dad must approve of the pop star’s desire to be just like his rock-and-roll dad. Bieber’s mom however, who is said to be very religious, may not agree.

Although Bieber’s parents divorced with Bieber was only two, Bieber’s relationship with his dad has remained strong, and it is likely that Justin Bieber’s tattoos were influenced by his rocker dad. It was Jeremy after all who taught Bieber how to play some songs on the guitar when he was younger, and later introduced the now pop star to bands like Guns N’ Roses and Metallica. It’s obvious that Justin Bieber admires his dad, who has tried to make a career out of music himself. With three tattoos at age seventeen, it seems likely that Bieber may also admire his dad’s body art. This could mean many more tattoos in Bieber’s future!

3 Responses to: The Justin Bieber Star Tattoo Fake Out