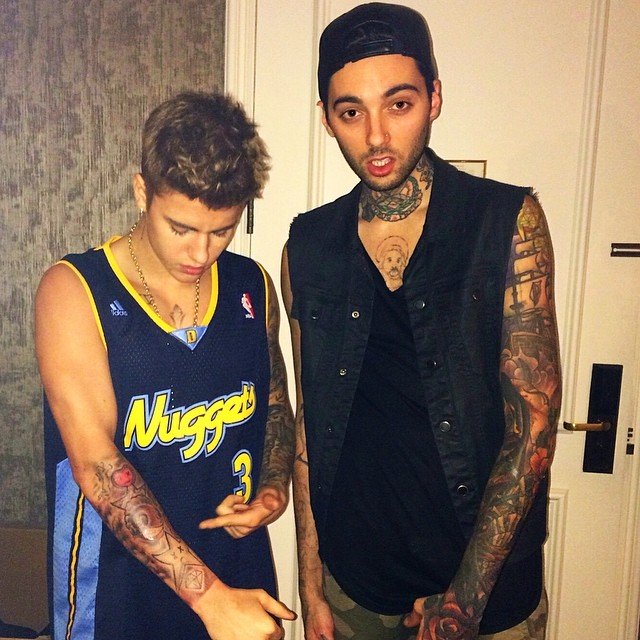 So we know that Justin Bieber has gotten one or more new tattoos, presumably inked as part of his right half-sleeve, but the singer has somehow managed to keep the mysterious tattoo design under wraps over the past few days. We first heard about Justin Bieber’s tattoo on April 17, 2014, when California-based tattoo artist Romeo Lacoste posted a photo on Instagram of himself and the inked-up pop star, along with the caption: “Tattooed Justin again last night till 6am. He showed me a lot [of] luv. Thanks @justinbieber.” This latest Bieber tattoo comes just one month after the singer declared that he was finished with ink for a while. 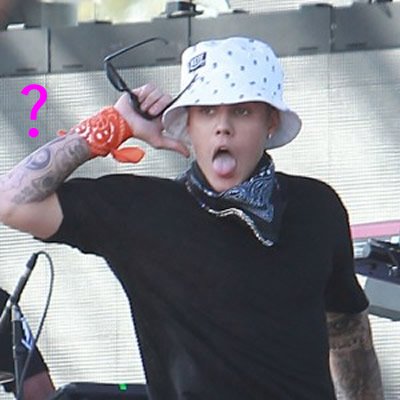 In Romeo Lacoste’s Instagram photo, Justin is pointing at the latest additions to his right half-sleeve, which include a red heart with legs, a big star with X’s for eyes, a diamond and some kind of cartoon face. It’s not clear what new tattoo(s) Romeo may have added to Justin’s half-sleeve, but the singer obviously had some work done in the wee hours of April 17. Judging by the photo, it looks like Justin may have had the cartoon face tattoo colored in, and may have also had some shading added to the spaces surrounding his new half-sleeve tattoos. Several days after posting that first picture, Romeo Lacoste shared another pic of Justin’s tattoo session on Instagram, writing, “B told me ‘that’s why we get tattoos of cartoons and stuff from our childhood, so we’ll always remember those times and where we came from.'”

Although Forever Young Ink’s Seunghyun Jo is responsible for the tattoo designs that were inked on the inside of Justin’s right forearm back in March, the singer went under the needle a few days prior and added a bunch of new tattoos to the outside of his right forearm during a mammoth tattoo session on March 15 that lasted until 5 a.m. Since Romeo Lacoste’s Instagram post said that he “tattooed Justin again” in a session that lasted until 6 a.m., our guess is that Mr. Lacoste may have also been the artist behind Justin Bieber’s tattoos of the diamond, heart, star and cartoon face. Stay tuned to find out more about Justin’s new tattoo!