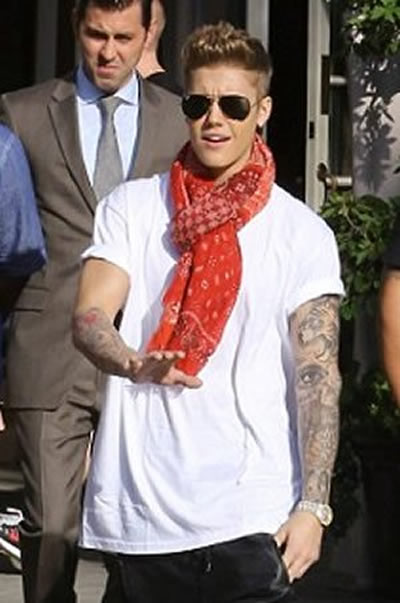 The month of March was a crazy one for Justin Bieber. Besides spending loads of time recording some new music in his Toronto studio, the Biebs also spent a considerable amount of time getting inked…at the tattoo shop, in his recording studio, and even 40,000 feet in the air aboard a flight from Panama to Canada – true story, folks. Following an epic tattoo session in March that left Justin with at least 10 new tattoos on his right arm, the singer posted a series of pictures of his new half-sleeve on Instagram and captioned the final photo: “Done with tats 4 a while…Where I wanna be…” Then, just two weeks later, Justin showed off yet another tattoo, this time featuring the word “Patience” inked vertically down the side of his neck. The question is, now that Justin has what seems to be a full-on addiction to tattoos, is he capable of giving them up for a while? We think not.

It was at the age of 16 (with dear old Dad by his side) that Justin Bieber got his first-ever tattoo – a small seagull tat on his left hip – and just four years later, the singer already sports close to 50 tats, most of which are inked in full- and half-sleeves on his arms. While the majority of Justin Bieber’s tattoos are inspired by the pop star’s deep-seated religious beliefs, including the large cross tattoo on his chest he had inked by Bang Bang at 40,000 feet, he has veered away from religion with some of his most recent ink, concentrating instead on his appreciation for graffiti artwork and street artists like Banksy and KAWS. Although Justin has received quite a bit of criticism lately over his controversial graffiti artwork in Brazil, Miami and Los Angeles, he obviously draws inspiration from the art form and said recently that he considers graffiti his “new hobby.”

On Bieber’s right arm, where he originally had his tiny Kanji music tattoo and just a few other discreet pieces, the pop star now sports more than a dozen other tats forming an impressive half-sleeve, including a large Korean mask, an old-school boom box, a Magic 8-Ball and a Mario Brothers ghost, courtesy of Forever Young Ink in Canada. Justin’s half-sleeve on his right arm was inked in just two epic tattoo sessions, marking the first time the singer went under the needle for more than just a couple new pieces at once. This leads us to believe that Justin Bieber is becoming more and more comfortable (and addicted to) getting inked, and so we’re not convinced that he’ll be able to quit, even just for a little while. Remember, he showed up with a new “Patience” tattoo on his neck just two weeks after claiming that he was “Done with tats 4 a while.” We don’t know about you, but we are looking forward to many more Justin Bieber tattoos in the future!