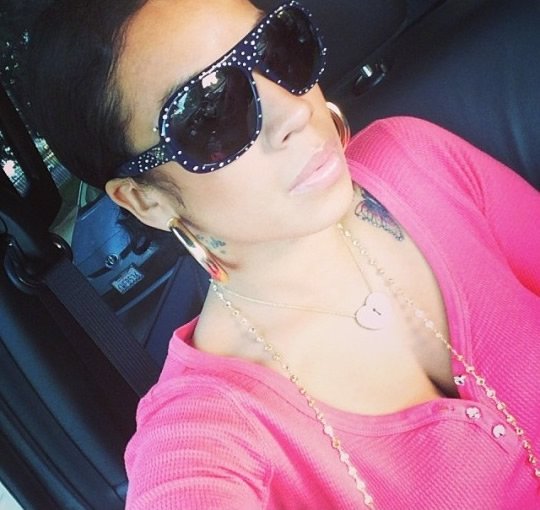 Early in October 2013, Keyshia Cole posted a picture on Instagram of her getting a new tattoo on her shoulder, which wasn’t surprising since the singer has quite a few tats inked on her body already. What is surprising though, is that when Keyshia Cole finally revealed her new tattoo, we realized it covers up the tat she had dedicated to her NBA husband, Daniel “Boobie” Gibson. Miss Cole’s “Truly Blessed, D. Gibson” tattoo on her left shoulder has apparently been replaced with a colorful butterfly tat, a fact that has fueled divorce rumors about the once-happy couple.

Since Keyshia Cole’s tattoo cover-up went public, there has been quite a bit of speculation about why the couple, married since May 2011, may be calling it quits. According to some, Daniel Gibson cheated on Keyshia, and may even have gotten another woman pregnant while the two were still married. Other people say that Keyshia is still hung up on ex-boyfriend Young Jeezy, whose birthday party the singer attended solo back in September. Not a good sign for “Boobie.”

According to Keyshia, a lot of her tattoos represent her religion, because she believes her faith got her where she is today. “I feel my belief in God gave me the strength to leave Oakland, and to be successful at accomplishing the things I’ve accomplished so far,” the singer once said. “Keeping all of that in mind always gives me strength.”

Because butterfly tattoos typically symbolize spirituality, rebirth and new beginnings, it seems fitting that Keyshia would get a vibrant butterfly tattoo to replace the tribute to her allegedly unfaithful husband.

It’s nice that Keyshia Cole has such a strong belief system, but with news about a potential cheating scandal involving her husband, the songstress’ faith in her marriage (and love in general) may take a pretty bit hit. It seems the disturbing tattoo Keyshia Cole has inked on her arm – a gigantic wooden stake driven through the middle of a bloody heart – may have been a kind of premonition…