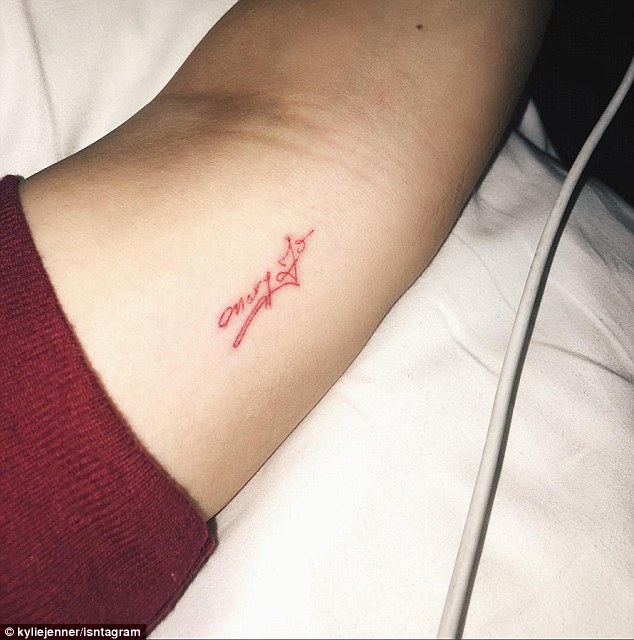 Sisters Kylie and Kendall Jenner have experimented with fake Sharpie tattoos in the past, but both girls have moved on to permanent ink recently, and Kylie has chosen a very interesting theme for her ink. Since getting her very first tattoo back in August 2015 – an outline of a heart inked on the back of her left arm – model and reality TV star Kylie Jenner has added two more pieces to her collection, and all three of Kylie’s tattoos have something in common…they are all done in bright red ink. Read on to learn all about Kylie Jenner’s tattoos and the personal meaning behind her cardinal-colored ink.

Tattoo #3 – Red Tattoo of Grandmother’s Name: Kylie apparently caught on to how fun it is to keep people guessing when it comes to a mysterious tattoo, so when she got tattoo number three in February 2016, she posted a Snapchat video of the tattoo session but never revealed the tattoo itself, which was inked on her arm. It wasn’t until a couple weeks later that Kylie posted an Instagram snap of her arm tattoo – also done in red ink – along with the caption “grandmothers name in my grandfathers handwriting.” Turns out, the bicep tat reads “Mary Jo,” the name of Kris Jenner’s mother, in a red script writing modeled after her late grandfather’s.

Tattoo #2 – Phonetic Spelling of “Sanity” in Red Ink: Just three months after debuting her first-ever tattoo, Kylie went back under the needle for a sexy tattoo of what appeared to be a short line of text on her hip, but chose to keep the design a secret for nearly a month. Kylie’s second tattoo was inked on her right hip by celebrity tattooist Bang Bang, and was revealed in December 2015 to be the phonetic spelling of the word “sanity,” also inked in red.

Tattoo #1 – A Red Heart Outline: Formerly tattoo-free Kylie Jenner surprised us all when she got a small heart tattoo inked on her arm in August 2015, right around her 18th birthday. Inked in red, the heart outline tattoo on the back of her left arm was rumored to be a tribute to boyfriend Tyga, who got a “Kylie” tribute tattoo inked on his own arm the previous April. Tyga and Kylie’s relationship has gotten a little rocky since then, so it’s probably a good thing Kylie opted for a heart rather than Tyga’s name, but the couple appears to still be going strong. 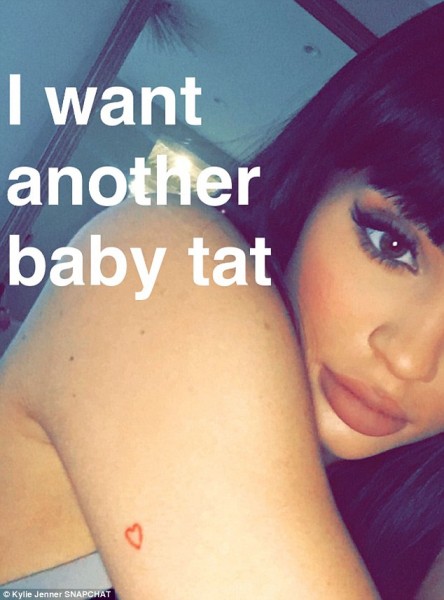 Kylie Jenner has wasted no time getting inked since she turned 18 just six months ago, and she apparently knows exactly what she wants in a tattoo, which is why all her ink is meaningful to her, and why all three of her tattoos are done in red ink. When asked why she has gone with red ink for all three of her tattoos, Kylie responded on Twitter, “Because red is different” with a smiley face. Kylie also recently posted a Snapchat video with a text overlay that says “I want another baby tat,” so it’s possible she may find herself back in the hot seat before too long! Stay tuned to PopStarTats to get up-to-date information on all Kylie Jenner’s tattoos!