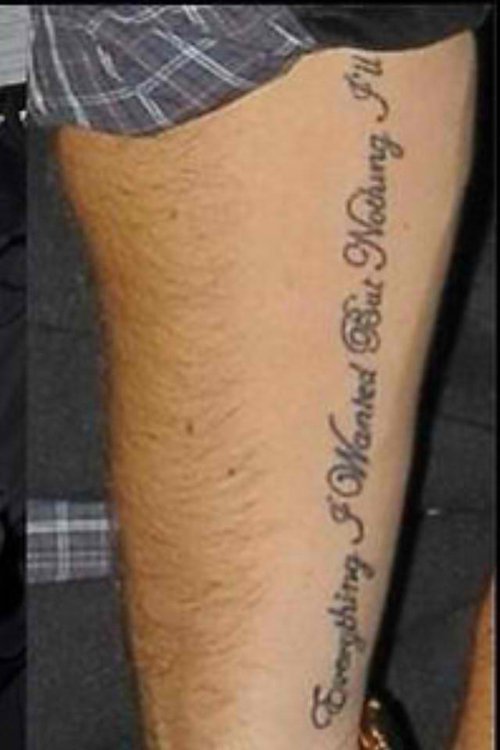 There’s no question that the inked-up One Direction boys love random and sometimes cryptic quote tats, and the prominent tattoo Liam Payne sports on his arm is no different. The singer’s quote tattoo is located on the outside of his left forearm, running from his wrist all the way to his elbow, and inked in elegant black script are the words “Everything I wanted but nothing I’ll ever need.” Sort of philosophical for good old Liam, don’t you think? Read on to find out what inspired the pop star to get this particular arm tattoo…

The “Everything I wanted but nothing I’ll ever need” tattoo on Liam Payne’s arm was inked back on October 20, 2012, and was the singer’s second tat, following the screw tattoos he and his bandmates got inked on their ankles to keep them grounded. The pop star first revealed the philosophical quote tattoo on his arm while at the Funky Buddha club with some of his friends in London. Apparently Liam took a break from partying to perform some magic tricks for the crowd outside the club, but the lucky fans got an eyeful of the singer’s new tattoo instead!

Shortly after getting the large tattoo inked on his arm, Liam sat down with British DJ Scott Mills to explain the inspiration behind the quote: “It’s basically that obviously we’ve got a lot of things from doing this and stuff, and there are things that I want, but all I ever need is my family and these four boys right here.” Aww, so cute Liam! Although Liam meant his “Everything I wanted…” tattoo to symbolize his devotion to One Direction and his family, the ink comes off sort of sad, don’t you think? Like he may have fame and fortune, but still none of that makes him happy?

Well, Liam isn’t the only One Direction singer that favors mysterious quote tattoos that sometimes seem more melancholy than anything else. Louis Tomlinson has a huge tattoo across his chest that reads “It is what it is” in a hard-to-read scrolling script and Harry Styles has more random quote tattoos than we care to count, including the “Might as well…” tat on his waist, “I can’t change” on his left wrist, and “Things I can…” and “Things I can’t…” on his arms. In addition to his arm tat, Liam has another quote tattoo inked on his wrist that says, “Only time will tell…” What is it with these One Direction boys and their somber quote tattoos??

One Response to: Liam Payne’s “Everything I Wanted…” Arm Tattoo