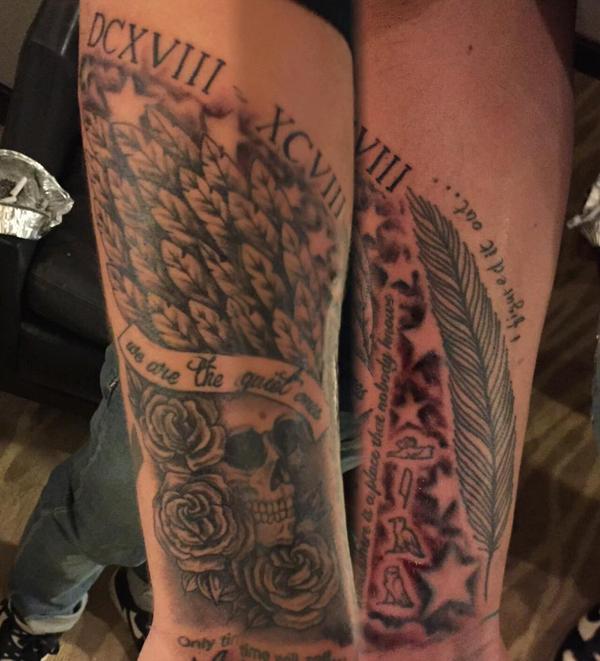 Despite having lost one of their top band members earlier this year, One Direction proved in their new “Perfect” music video that they still have what it takes as a four-some, and Liam Payne proved that he loves tattoos just as much as Harry Styles and Louis Tomlinson, revealing not one but two fresh pieces in the video. Liam Payne’s new tattoos were both done at a tattoo shop in New York City, and are located on the outside of his right forearm – one featuring a bunch of feathers and stars that extend down around his hieroglyphics tattoos, and the other featuring the Roman numerals “DCXVIII – XCVIII,” which look like they may have been inked while the “Perfect” music video was being filmed!

If you feel like you’re experiencing déja-vu, you’re not. This is actually the second time Liam Payne has showed off two new tattoos at once this year, the first time being just about a month ago, right around his 22nd birthday. At that time, Liam had gone under the needle for a large eagle tattoo on the back of his right hand and a pretty impressive skull and roses tattoo on his right forearm, with a banner that reads “we are the quiet ones.” At this point, it looks like Liam is probably working towards a full sleeve on his right arm, being that his new Roman numeral and feathers and stars tattoos are inked above his skull and roses tat, extending pretty far up his right arm.

If you’re wondering about the meaning of Liam Payne’s new Roman numerals tat, which are being inked on his arm in the “Perfect” music video, look no further than where he got his start in the music business, along with Harry Styles, Louis Tomlinson, Niall Horan and former bandmate Zayn Malik. That’s right, Liam’s Roman numerals tattoo represents his X Factor audition number, which, if you take a look at old photos of his audition, was 61898. Liam isn’t the only 1D band member to get a tattoo inspired by his X Factor debut. Zayn Malik also rocks a tattoo of his X Factor audition number 165616, with each number inked in a different spot on his right sleeve. 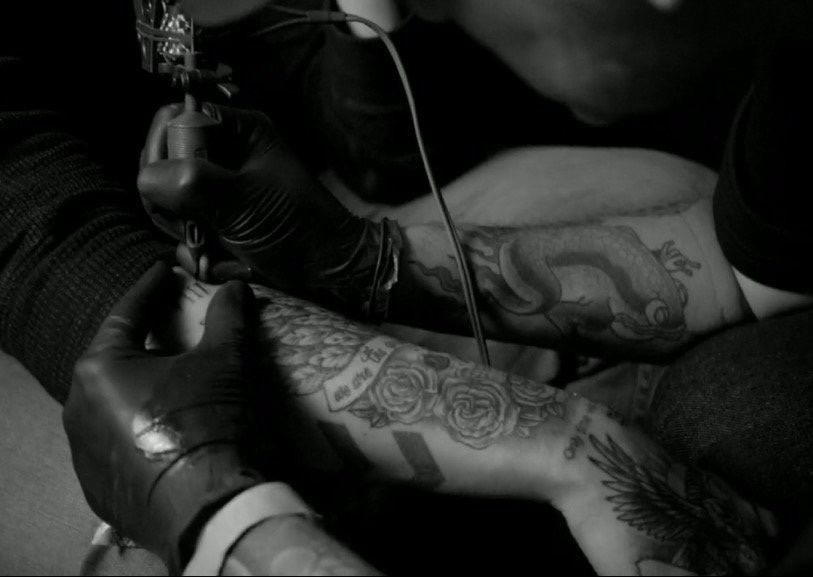 So we know that both of Liam’s Payne’s tattoos were done back in September, and that his Roman numeral tat is a tribute to his appearance on the X Factor, but as far as the meaning behind the 22-year-old’s feathers and stars tattoo goes, we’re not entirely sure what Liam was going for here. It looks like the stars in his arm tattoo were probably just meant to act as filler for his soon-to-be-sleeve, but what about the feathers? They certainly don’t look like filler, being that they take up so much space on his arm, but the story behind the piece remains a mystery to us. Are they eagle feathers, like the eagle tat on his hand, or a feather like the one in Liam’s arm tattoo tribute to his grandmother? What do you all think Liam’s new arm tattoos mean??

A Special thanks to PST fan Aimee Reider for finding these tattoos!!