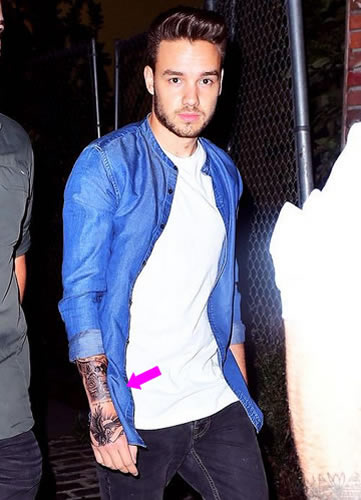 While partying it up at The Biergarten in New York City for a friend’s bachelor party over the weekend, (former?) One Direction’s Liam Payne revealed TWO new tattoos on his arm and hand: a skull and roses tattoo inked on his right wrist/forearm area, and a tattoo on the back of his hand of an eagle in flight, with the sun rising in the background. Liam’s detailed eagle hand tattoo is inked just below his “only time will tell” wrist tattoo, and the skull and roses ink is located near his “somewhere is a place that nobody knows” arm tat. Liam Payne’s tattoo of the skull and roses was inked at Rising Dragon Tattoos in the Chelsea section of New York, and his eagle hand tattoo was inked a day or two prior.

Liam Payne celebrated his 22nd birthday on Saturday (complete with a pretty epic Harry Potter cake), and what better way to commemorate yet another year under the belt than getting some new ink?? Photos of Liam Payne’s new tattoos were posted on Instagram by Rising Dragon Tattoos on August 31, along with the caption “Liam Payne from One Direction, stopped by to add to his tattoo collection. Thank u so much, it was a pleasure to meet you! Skull and roses by Daniel.” Well, Daniel did a pretty darn good job on Liam’s skull and roses tattoo, which features a black and white skull surrounded by rose blossoms, along with a banner across the top reading “we are the quiet ones.” 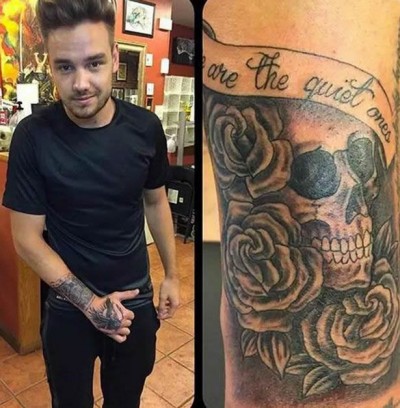 Judging by photos of One Direction performing in Detroit on August 29, Liam Payne got his eagle hand tattoo first, and then hit up Rising Dragon Tattoos a couple of days later for his skull and roses tat. Similar to his “we are the quiet ones” skull and roses ink, Liam’s eagle hand tattoo features two banners, which look like they are meant for text, but are currently blank. We absolutely cannot wait to find out what text Liam decides to include in the blank banners…perhaps “Liam” and “Sophia,” which would seemingly confirm the engagement rumors that have been swirling about these two recently??

As all of you die-hard One Direction fans know, it’s been more than a year since Liam last went under the needle, getting the mysterious “somewhere is a place that nobody knows” tattoo inked on the inside of his forearm in May 2014, 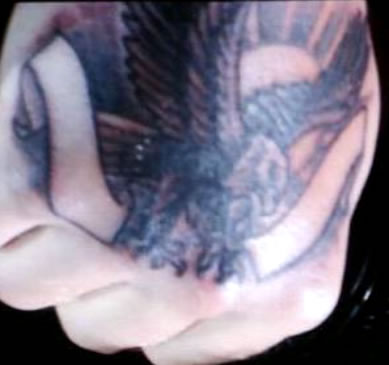 and with these two new tats on Liam’s right arm, joining his chevron and feather arm tattoos, the inked-up singer adds to what may very well become a half-sleeve! We can’t wait to see it completed!

A Special thanks to PST fan Aimee Reider for pointing out this tattoo!!