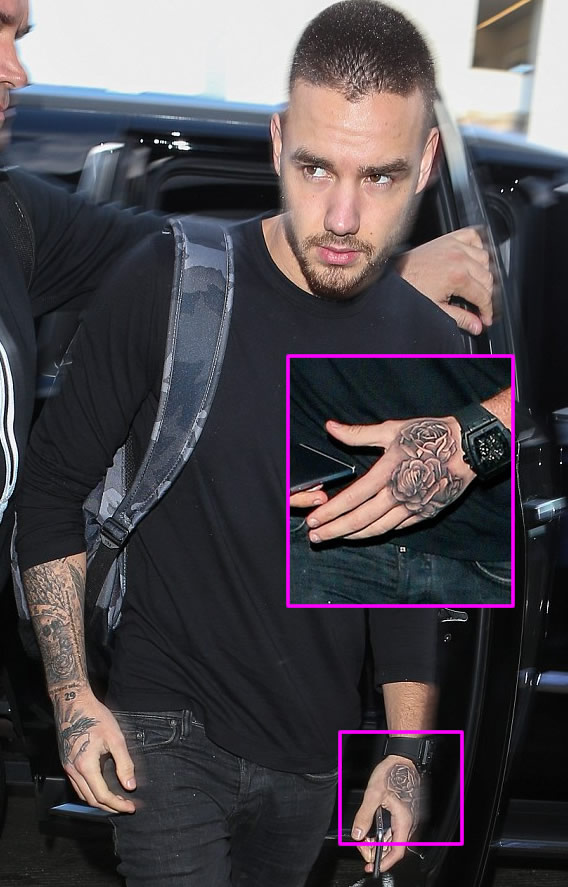 We first caught a glimpse of some new ink on Liam Payne’s left hand while the singer was hanging out with some friends at a Starbucks a few days ago, but it wasn’t until he was photographed at LAX airport in Los Angeles on January 15, that we could make out the full design of Liam’s hand tattoo. This latest tattoo for Liam Payne features a collection of three roses inked in black and gray on the back of his left hand, reaching from his wrist up to his fingers, and matching quite nicely with the flying eagle tat the 22-year-old had done in the same spot on his right hand back in August.

The photos of Liam Payne’s new tattoo cropped up online the day after the 22-year-old shared a steamy selfie while lying in bed shirtless, with the simple caption “morning.” The formerly gawky teen who auditioned for X Factor in 2008 is no more, that’s for sure, and Liam Payne is definitely upping his sex symbol status with his growing collection of tattoos, much like his inked-up bandmates Harry Styles, Louis Tomlinson and Zayn Malik. Since debuting his very first tattoo just a few years ago, Liam has amassed a total of 13 tattoos so far, including his new roses tattoo, and is currently working on what appears to be a full sleeve on his right arm.

As for the meaning behind Liam Payne’s roses tattoo, the singer has yet to reveal its significance, but there are quite a few possible meanings for the three roses design. While rose tattoos typically stand for the obvious things like love, beauty, spirituality or youth, the fact that Liam chose three roses for his hand tattoo could have a very specific meaning. According to Victorian tradition, for example, three roses sent by a suitor to a lady meant “I love you,” and even the location of the roses and their stage of bloom sent a particular message. As far as Liam Payne’s roses tattoo goes, it could be a symbol of love, possibly even a reminder of the love he shared with Sophia Smith, from whom he recently split. 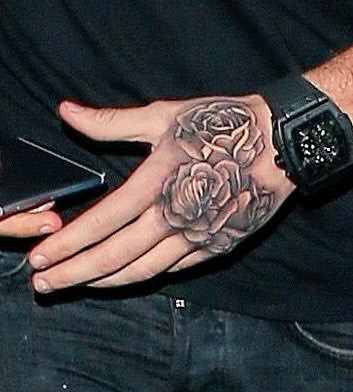 It’s obvious that 2016 is a year of change for Liam Payne, who, in addition to his new hand tat, also showed off his fresh buzz cut when he arrived at LAX on Friday. One Direction is enjoying a bit of an extended hiatus right now, and Liam, who has added quite a few new tattoos to his collection over the past several months, is apparently using this time to travel and score some new ink. And while One Direction fans are growing increasingly worried that the band’s planned break may actually be a permanent split, we’re just excited to see what other tattoos Liam Payne and the 1D boys have planned!

A Special thanks to PST fan Aimee Reider for help in discovering this tat!!