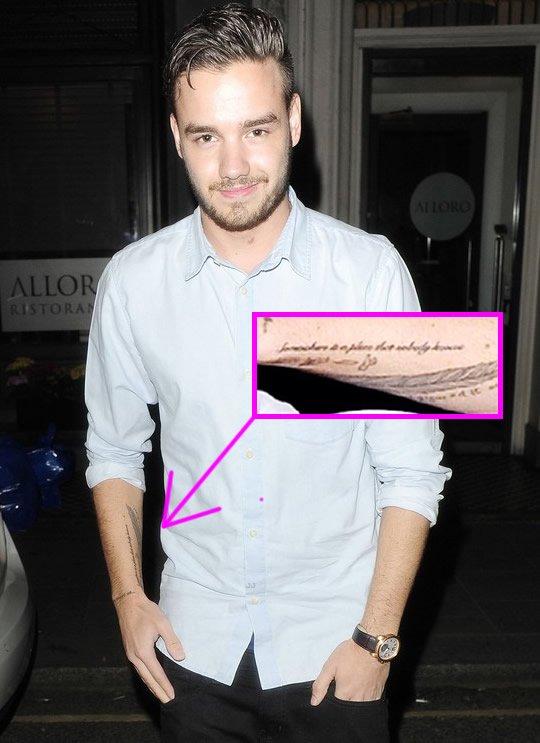 *Update: Thanks to 1D fan Katherine Curry, we now know that Liam Payne’s arm tattoo reads “Somewhere is a place that nobody knows.”

One Direction is currently enjoying the South American leg of its Where We Are world tour, and Liam apparently took some time out of his hectic schedule this week to add a mysterious new tattoo to his already inked-up forearm. In a photo posted online of Liam and his bandmates sightseeing in Chile, you can see a long line of ink that joins Liam Payne’s tattoos of the feather and hieroglyphics on his right forearm. The only problem is, it’s pretty impossible to tell what Liam’s new tattoo says in the blurry photo…can you figure it out??

While Liam Payne has, in the past, followed in the footsteps of bandmates Harry Styles and Louis Tomlinson when it comes to seemingly random quote and scribble tattoos, the collection of ink on Liam’s right arm seems to be the most important to him. The large feather tat on the inside of his forearm, for example, is a tribute to his late grandmother, and is the only tattoo of Liam’s that his mother actually approves of. According to Liam, when he was young, anytime he found a feather around the house, his mother would tell him that it was his nan leaving them for him, and so the feather tat on his arm is a permanent reminder of that bond.

Above Liam’s feather tattoo is a series of hieroglyphic symbols that stand for “Liam,” and directly above those symbols is Liam’s mysterious new tattoo. The textual tattoo is inked in a black script font and looks like it consists of five or six words, reaching from his right wrist to about halfway up his forearm, almost meeting with the tip of his feather tat. Judging by Liam Payne’s other text-based tattoos, we’re assuming this new ink is a meaningful quote or short selection of lyrics that struck a chord with the pop star. Stay tuned to find out what Liam Payne’s tattoo actually says!

**Listen up Pop Star Tats fans – If you are able to decipher Liam Payne’s new arm tattoo in the comments section below, you will have the honor of being considered by us a super awesome human being. Let the games begin!

5 Responses to: Liam Payne Flashes New “Somewhere is a place that nobody knows” Arm Tattoo While Touring in South America