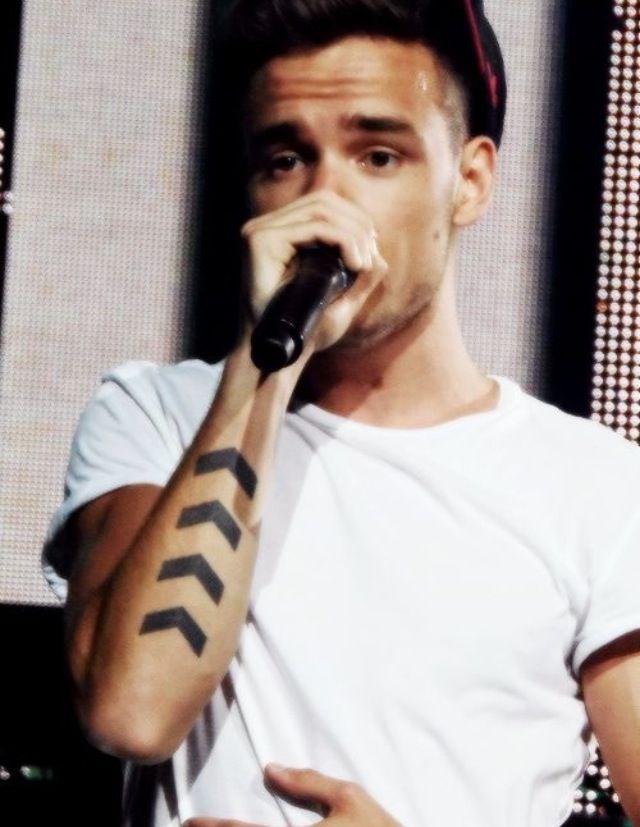 During a revealing game of “Never Have I Ever” with Ellen DeGeneres this week, Liam Payne of One Direction admitted that he regrets one of his tattoos – the prominent tattoo of four thick black chevrons he got inked on his arm back in November 2012 as a tribute to his (formerly) four bandmates. If you’re surprised that Liam regrets his arm tattoo, you only have to take a look at the four arrows extending from his right elbow almost to his wrist to figure out why. The exceptionally bold ink isn’t the prettiest design we’ve ever seen, to be honest, and when Zayn Malik left One Direction earlier this year, it kind of squashed the whole 1D tribute tattoo idea.

As Liam Payne says during Ellen’s “Never Have I Ever” game, “When I first got [this chevron tattoo], I was kind of like, ‘What have I just done to my arm?’ I woke up in bed and the first thing I Googled was how do I get this thing off me?” Liam wasn’t the only one with serious reservations about the arrows tattoo though. “My mom cried, my dad probably cried a bit, everyone was crying and stuff. So I thought, this was a bad move.” Unfortunately, as Ellen points out during their “Never Have I Ever” game, getting a tattoo removed is even more painful than getting a tattoo done in the first place, so it seems Liam Payne’s chevron tattoo is here to stay.

Even though Liam Payne may have some regrets about his arrow arm tattoo, it seems that he has embraced the ink, which he revealed in a 2012 Twitcam video represents each of his bandmates. Since then, Zayn Malik has broken ties with One Direction, but since Liam Payne’s tattoo was originally inked with four chevrons – one each for Harry, Louis, Niall and Zayn – it still makes sense as a One Direction tribute tattoo, but with one chevron for Liam himself instead. And while before, the four chevrons stood out as a stark contrast to the rest of his arm, Liam has gradually been adding more and more ink to his right arm, so at least it blends in a little bit now!

One Response to: Liam Payne Has Some Regrets About His Chevron Arm Tattoo