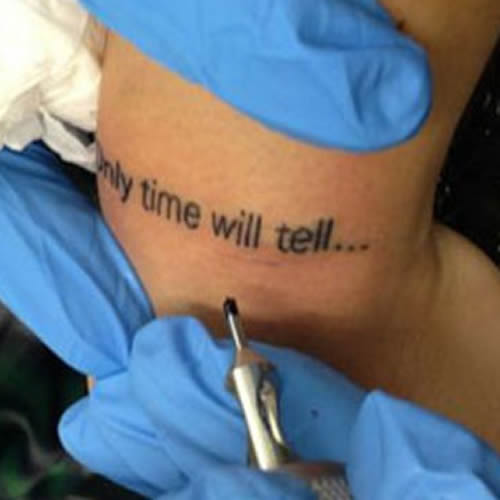 Proving again that he has a certain way with words, Liam Payne got another quote tattoo inked on his body in October 2012 – this time marking his wrist with the words “only time will tell…” That’s right, Liam is following in the footsteps of his inked-up bandmates Harry Styles, Louis Tomlinson and Zayn Malik, which means the most sensible and gentlemanly of the One Direction boys may soon find himself covered in all sorts of ink. We have a feeling the “only time will tell…” tattoo inked on the outside of Liam’s right wrist is only the beginning for this clean-cut One Directioner, and we couldn’t be more thrilled!

Liam Payne’s wrist tattoo is a pretty simple piece, with the words of wisdom inked in a clean black font, unlike most of Harry Styles’ tattoos. The singer revealed his “only time will tell…” tattoo on Twitter on October 27, 2012, along with the message “Thanks @steveskunx.” Liam’s quote tattoo was inked by Steve Richardson, a tattoo artist at Skunx Tattoo in London, just one week after the “Everything I wanted but nothing I’ll ever need” tat Liam got inked on his arm and a couple weeks after he got his first-ever tattoo: the screw tats he sports on his ankles. 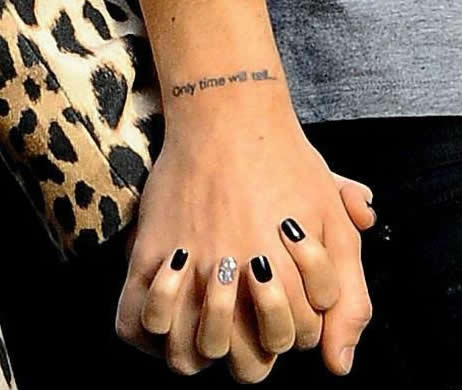 While their matching screw tattoos were meant as a reminder to the One Direction boys to stay grounded and in the present, Liam’s wrist tattoo appears to deal with the past and future instead. The ink came shortly after Liam broke things off with long-time girlfriend Danielle Peazer, and could be a tribute to a potential reunion between the two in the future. Liam and Danielle, a dancer and model, split for the first time in the fall of 2012 only to get back together in December 2012 and then break up again in March 2013. For this on-again, off-again couple, the phrase “only time will tell…” seems like a pretty accurate statement to us!