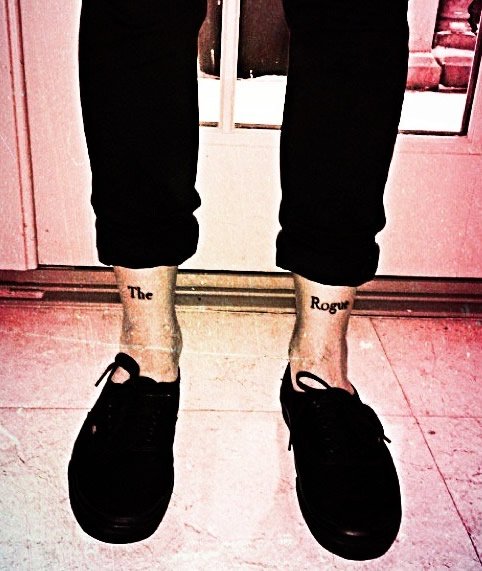 There’s no doubt that the boys from One Direction take tattoo inspiration from one another, and sometimes even get matching tats as a group. Such was the case with the tattoos of two screws that Louis Tomlinson and all of the other 1D band members sport on their ankles. Then, when Harry Styles got inked with the lyrics to George Michael’s song “Careless Whisper” on his left and right ankles, Louis followed shortly thereafter with similar ankle tattoos dedicated to his former band. As Louis and his One Direction buddies continue to go tat for tat, stay tuned to keep up-to-date on their new ink!

There’s something to be said about remembering where you came from, and Louis Tomlinson proved that he’ll never forget his roots when he got two prominent tattoos on his ankles reading “The Rogue.” Louis’ ankle tattoos were inked in March 2013 as a tribute to Louis’ high school band, which also consisted of five male members and used to play in their school assemblies. Much like Demi Lovato’s “Let Go & Let God” tattoos on her feet, Louis’ tattoo features the word “The” on his left ankle/shin and the word “Rogue” on his right ankle/shin. Louis shared a picture of his mysterious tattoo on Twitter after his girlfriend Eleanor Calder posted it on Instagram, along with the caption: “The Rogue :)” When asked by a fan site what his ankle tattoos represented, Louis responded: “it’s the name of the band I was in before One Direction.” It’s nice to think that Louis’ fame and fortune hasn’t gone to his head!

They are so small that if you blink you might miss them, but Louis Tomlinson has two tiny tattoos on his ankles featuring what the One Direction boys insist are screws. Louis’ screws tattoos, which look more like plus signs to us, are inked on the inside of his left and right ankles (right on the bone…ouch!) and match tats that all of his band mates have inked in the same location. According to the pop stars, the matching screws tattoos help them remember to stay grounded. Louis’ ankle tattoos were inked in October 2012, along with many of his arm tattoos, and the singer followed up the tattoo session with this loaded Tweet to Niall: “So Me and Liam joined the crew yesterday and got two screw tattoo’s on our ankles, now we all have it except Niall!” To which Niall responded, “Ok I’ll give into you! I’ll get it done! Jesus! Have ya quite finished? #neglect hahahaha.”

One Response to: Louis Tomlinson’s Two Screws and “The Rogue” Ankle Tattoos